The Pause That Refreshes

April 29, 2018 Vita Historia
Editor’s note: There was no post on this website last Friday, April 27, because it is healthy to take a break and go fishing once in a while.

“The pause that refreshes” was a slogan coined in 1929 by Coca-Cola marketers, and nearly a century later it remains one of the most memorable advertising slogans for Coke, or for any other product. It was also in the 1920s that Henry Ford instituted a new policy at his automobile manufacturing plant to shorten workers’ shifts to eight hours and their work week to 40 hours, a model that soon became the standard throughout American industry. In 1938, the federal government established with the Fair Labor Standards Act a minimum wage and rules for most workers to receive time and a half payment for hours worked over 40 in a week. 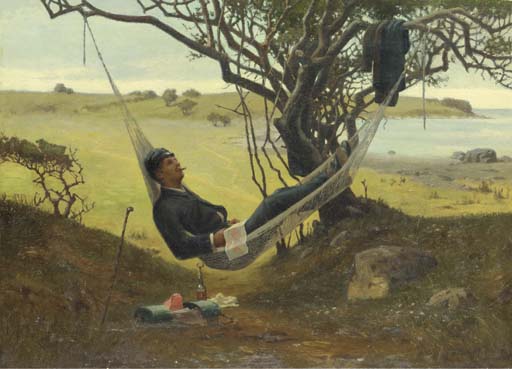 An Afternoon’s Rest, an 1885 painting by Niels Frederik Schiøttz-Jensen (1855-1941).
It’s still up to the states to regulate breaks and lunch time off for workers, and many do so in a minimal way, if at all. It may come as a surprise to some workers that their breaks often come solely at the discretion of their employer or, if they are with a union, because breaks are written into the contract between the union and management. Even bathroom breaks can be a source of contention between labor and management. It is a wonder then to consider how much conditions for workers have generally improved since the early years of the industrial revolution in the eighteenth and nineteenth centuries, when 12 and 16 hour days were not uncommon and workers’ welfare and safety were entirely their own lookout.
What changed things was when workers started to organize and bargain collectively in the late nineteenth century. It is a misconception to think the worker holiday of May Day started in communist countries, because it actually began in the United States, and has come to commemorate the Haymarket affair in Chicago, Illinois, in May of 1886 when workers on strike and demonstrating for an eight hour workday ended up in deadly confrontations with the police over the course of two days. Unionization continued wringing concessions from management through the first half of the twentieth century, and from 1945 to 1975 the percentage of the non-farm workforce belonging to a union peaked at over 30 percent. In the years since, union membership has declined to less than half that, and the remaining unions, many of them organizations formed for the benefit of state employees such as teachers, are under attack from Republican controlled state governments.

A discussion of ways of coping in life from the 1964 film of The Night of the Iguana, based on the play by Tennessee Williams, directed by John Huston, and starring Ava Gardner, Deborah Kerr, and Richard Burton as the defrocked Reverend Dr. T. Lawrence Shannon.

None of that changes the need of people concentrating on their work to take a break from it every once in a while throughout the day, and for weeks or more at a time throughout the year. Robots have no need of breaks, but for the time being there are still jobs robots cannot do and those jobs will require the talents of fallible, sometimes frail humans. Enlightened management can choose to view breaks for workers as beneficial to both parties, since a more rested worker can be more productive in the long run than one who is run ragged. Less enlightened management may consider the burnout of workers as the cost of doing business, believing they are easily replaceable cogs in management’s profit making machine. That mindset prevailed over a hundred years ago, before Henry Ford, who was by no means enlightened in all areas, nonetheless saw that his workers and people like them were the buyers of his automobiles, and raised their wages and improved their conditions in the interest of maintaining a kind of partnership with them, rather than treating them wholly as chattel, as cogs in the gears of production.
— Vita