“And only one for birthday presents, you know. There’s glory for you!”

Humpty Dumpty smiled contemptuously. “Of course you don’t — till I tell you. I meant ‘there’s a nice knock-down argument for you!'”

“When I use a word,” Humpty Dumpty said, in rather a scornful tone, “it means just what I choose it to mean — neither more nor less.”

“The question is,” said Alice, “whether you can make words mean so many different things.”

“The question is,” said Humpty Dumpty, “which is to be master — that’s all.”

Recently Michael Cohen, lawyer and fixer for Supreme Leader, revealed in court that one of his other clients was Fox News commentator Sean Hannity. It’s difficult to classify Mr. Hannity professionally, though “journalist” he certainly is not. Commentator will have to do, since “blowhard”, while more accurate, descends to the same kind of ad hominem mudslinging Mr. Hannity himself indulges in, and you can’t beat someone like that at his own game. Is Sean Hannity really Michael Cohen’s client? Mr. Hannity doesn’t think so, and the $10 he paid Mr. Cohen for his services was merely hush money in the form of attorney/client privilege. 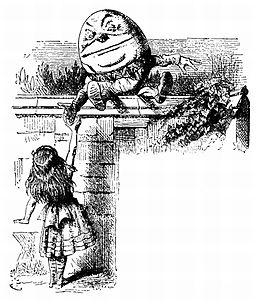 Illustration by John Tenniel (1820-1914) of Alice greeting Humpty Dumpty.
Michael Cohen certainly works by an unusual business model, taking merely ten bucks from Sean Hannity in return for supposedly giving only real estate advice, and supposedly out of his own pocket forking over $130,000 in hush money to Stormy Daniels. What a great guy! Maybe he’s independently wealthy. He didn’t want to trouble the Horndog-in-Chief (at the time of the payoff still only Candidate Horndog) with the piddling matter of $130,000, and so he coughed it up himself.

Yankee Doodle Dandy, directed by Michael Curtiz, is a 1942 musical biography of songwriter and showman George M. Cohan, and in this scene Joan Leslie and James Cagney sing a shortened version of Cohan’s song “Harrigan”.
For such an unusual attorney, to whom money means apparently nothing, there’s no telling what that sawbuck from Sean Hannity bought, if anything other than a little advice and some privilege to cover it. Speculation is a fun game, and in this case it might involve the guess that the $10 was for guidance in hiring a plastic surgeon to wipe that smirk off Mr. Hannity’s face. That can’t be right, though, since Mr. Hannity’s smirk is his signature look. He can’t do without that any more than Moe Howard of The Three Stooges could have done without his bowl haircut. Maybe the money was part of Mr. Hannity’s philanthropic effort to invest in neighborhoods with high foreclosure rates. Attorney/client privilege in that case would have been in the interest of true giving, where the right hand knoweth not what the left hand doeth, whether that’s slapping an eviction notice on an old lady’s front door or smacking down a librul (metaphorically, of course). 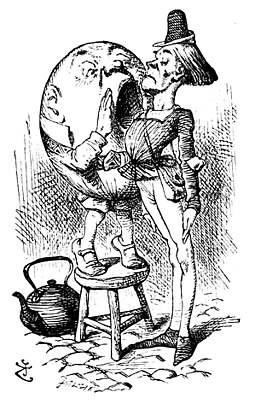 John Tenniel’s illustration of Humpty Dumpty shouting in the ear of the messenger in the poem he recites for Alice.
The truth is there’s just no telling what went on between Michael Cohen, selfless lawyer, and Sean Hannity, do gooder. The truth may ooze out when big, bad Robert Mueller, independent counsel, puts the squeeze on Mr. Cohen. Sean Hannity, Fox News commentator, will of course commentate – or bloviate, depending on your point of view – upon the proceedings in his usual fair and balanced manner. Then he will go hang out with his buddies at Mar-a-Lago, where no one dares to pee in his Post Toasties.
— Ed.