April 16, 2018 Editor
Editor’s note: This post was scheduled to appear yesterday, April 15, but a severe weather outbreak in the eastern part of the country knocked out internet service in our vicinity, delaying it’s appearance until today.

Sales of recreational vehicles have been setting records in the past several years as the economy continues to rebound from the Great Recession of 2008, and as Baby Boomers retire and adopt the RV lifestyle either full or part time. It is considered a lifestyle by the people who live it, people who read magazines and websites devoted to their concerns, and who share information with each other concerning their rigs and travels, both in person when they meet at campsites and on internet forums. Really it has developed beyond a lifestyle to a subculture, ever since Wally Byam introduced the Airstream trailer in the 1930s, and especially so since after World War II.

The subculture of RVers should not be confused with people who dwell in mobile homes, the majority of which are mobile in name only. Recreational vehicles as a category include teardrop trailers, pop-up campers, and self-contained vehicles with all the amenities of a complete home except a permanent yard. They range in price from $10,000 to $1 million. Most of all, unlike their cousins the mobile homes, recreational vehicles stay on the move. RVers tour the country and stop for visits that are only temporary, even if they may stretch to months. 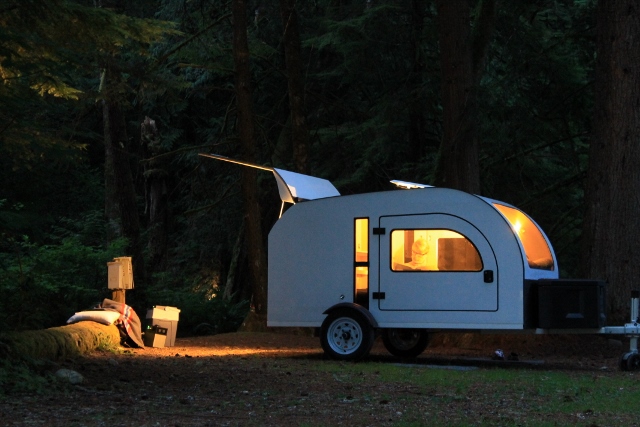 A modern teardrop camper trailer. Photo by PPILLON.
One rather surprising statistic about the recent boom in RV sales is how many of the vehicles are being bought by Millennials, the generation now in its teens, twenties, and thirties. RV ownership has typically been associated with retirees with a desire to travel, and it’s therefore not surprising that RV sales have increased as Baby Boomers, the largest generational share of the population, have reached retirement age since about 2010. There appears to be a different dynamic driving RV sales among Millennials, perhaps relating to the new fluidity in the service and internet economy, where jobs either are low paying and do not generate loyalty one way or the other, or the jobs are better paying in the technology sector and the workers can work from home, wherever that may be, whether near or far from corporate offices. In either case, for young people starting out and without a lot of funds, an inexpensive RV is adaptive to the modern economy while allowing them to travel and explore before settling down, if indeed they ever find the need to do so in the traditional sense of a house with a mortgage.

A montage of highlights from the 1953 film The Long, Long Trailer, directed by Vincente Minnelli and starring Lucille Ball and Desi Arnaz, with music for the montage provided by Perry Como singing “Breezin’ Along with the Breeze”.

There are RVers, young and old, who pick up extra income by traveling to seasonal work such as at Amazon.com warehouses, and that kind of thing will probably increase as more people take to the lifestyle and require some funds beyond Social Security, pensions, or other temporary service sector work. The employers like the arrangement, particularly as applications outnumber positions, allowing them to keep wages low, and because they are typically hiring responsible individuals with a good work ethic, even if they are in many cases unprepared for extended physical labor. Once the work is ended, both parties cut loose from each other without any further commitments, and in this case that is probably salutary for all concerned. One last thing the curious may wonder about the RV lifestyle, and that is about the relative safety of being in a RV during a lightning storm, and the answer is that a recreational vehicle constructed largely of metal top to bottom will most likely conduct a lightning strike safely to ground, though it is perhaps not wise to invite disaster by parking on the highest, loneliest spot in the countryside, or near a tree that qualifies.
— Ed.

“Gypsy”, a 1982 song by Fleetwood Mac, written and sung by Stevie Nicks, may represent different things to Baby Boomers as they age. It certainly represented several things to Ms. Nicks over the years as she progressed from initial idea to performance.