March 11, 2018 Vita Historia
“If you can convince the lowest white man he’s better than the best colored man, he won’t notice you’re picking his pocket. Hell, give him somebody to look down on, and he’ll empty his pockets for you.”
— President Lyndon Johnson to staff member Bill Moyers, on observing racial epithets on signs during a visit to Tennessee.

The terms “white trash” and “rednecks” are probably the only remaining instances where derogatory epithets are more or less acceptable in general society. Privately, of course, people of all stripes can and do use epithets of all kinds to describe others they don’t like, and it often matters little how different are the beliefs they express in public. The reason the labels “white trash” and “rednecks” may still be acceptable has to do with how, now more than ever before, they designate a voluntary lifestyle choice rather than an inborn condition. 100 years ago there was speculation among scientists and others that the condition had a genetic dimension, but since then the argument has been discredited along with the practical applications of eugenics, such as forced sterilization.

The white working class has attracted renewed scrutiny from politicians, the media, and academics after the perception of the 2016 election results as a resounding announcement from those ignored voters that they wanted their concerns addressed. By no means are white trash or rednecks any more than a minority of the white working class, and their votes comprise an even smaller percentage than that, since most of them do not habitually vote, or even register to vote. It is also untrue that white working class voters were the primary constituency of the Republican candidate elected to the presidency. There were not enough of them to install the Republican in office, any more than ethnic and racial minority voters alone made up enough of Barack Obama’s constituency to install him in office in 2008 and 2012. Nonetheless, politicians, the media, and academics unhappy with the 2016 election results have seen fit to blame the white working class, and by extension white trash and rednecks, for inflicting the current presidential administration of Supreme Leader on the country. 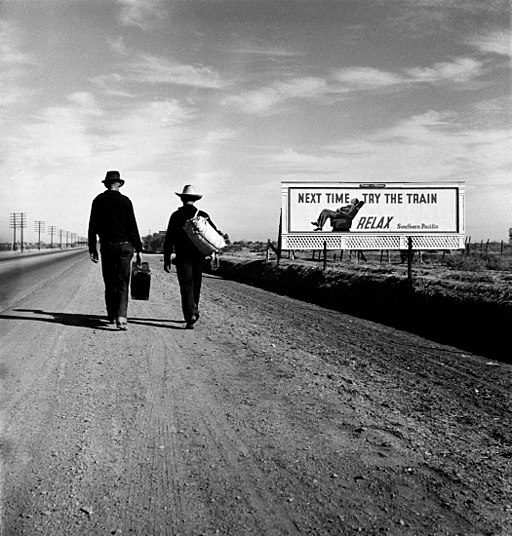 A 1937 photo by Dorothea Lange of two men walking toward Los Angeles, California. Ms. Lange took many photographs in her work for the Farm Security Administration (FSA), a New Deal agency.
There is no backlash to denigrating white working class people. Across the culture at the moment, it is a safe bet for people like academics who must otherwise be extremely careful in navigating the identity politics cultural minefield, lest they destroy the career in the bureaucracy. Certainly there are some people who deserve criticism, and perhaps as suggested earlier that would include people who have made a lifestyle choice to be vulgar and offensive. Making such a lifestyle choice now, when people have greater access to information than ever before, can be considered more than ever a conscious decision rather than a cultural or genetic backwater that a person cannot escape. But the information they seem to prefer is fake news over real news, and bolsters their apparent preference for ignorance over knowledge, bigotry over acceptance, and reality television over reality.

Near the end of A Face in the Crowd, a 1957 film directed by Elia Kazan, and starring Andy Griffith and Patricia Neal, the public gets a peek behind the mask of the demagogue, “Lonesome” Rhodes. There are many similarities between this film and today’s political and cultural environment, but there is one major difference in the ability of the public to register shock and disapproval for abysmal character flaws in its leaders. Some of the baser elements in today’s society would not only not be shocked by Rhodes’s revealing of his true character, but would approve of his remarks as a middle finger thrust upward on their behalf in defiance of elites.

Just about everyone seems to look down on someone else, to the point that it can be considered a universal human need. Elites are certainly not free from the need to look down on some other group, but in practice they have learned it is in their own interest to be circumspect about expressing their disdain, at least in public. Sneering at the white working class generally without first splitting off the subset of white trash and rednecks is a bad idea that serves to highlight the disconnected and arrogant nature of elites, and it is behavior that will serve to push white working class voters, once the foundation of the Democratic Party along with black working class voters, farther away from Democrats and more securely into the arms of Republicans, where they are given rhetoric they want to hear, but nothing of substance. Listening to people is the first step toward working with them, while loudly condemning them all as racist, misogynist white trash might demonstrate to everyone your purity for the satisfaction of your own smug self-righteousness, but it is hardly the way to win friends and influence people, a vocation otherwise known as politics.
— Vita