There but for the Grace of God

Roadside memorials for traffic accident fatalities have been appearing more frequently over the past 20 years, a period when the numbers of deaths per capita or per mile driven had been dropping until the last two years, when they have risen again. Since the increase in memorials has not been tied to overall traffic fatalities, there must be another reason. Unfortunately, no one seems to have a reason other than the increase in memorials being due to a snowballing cultural phenomenon. People become aware of the memorials, and then when a loved one dies in an automobile wreck, they feel moved to erect a memorial near that spot, and so the phenomenon builds on itself, this being its moment.


One force that could be feeding the movement is the amount of young people who are dying in traffic accidents, many of them on account of their own negligence due to distracted driving. Young people have always been overrepresented in the traffic fatality statistics due to their willingness to take foolish risks, but now add in their addiction to cell phones and they have become an even more dangerous element on the roads. Insurance companies, who put dollars and cents numbers on risky behavior, understand this and accordingly attach high premiums to policies for drivers under 30 years old. Having a relative taken away by death in a violent accident at a very young age is of course a more traumatic event than having one taken away by natural causes at an advanced age, and may be a factor in the urge of friends and relatives to build a roadside memorial. 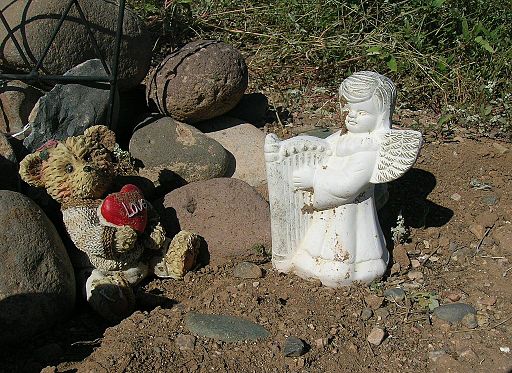 Statuettes at a roadside memorial in 2006.


None of this is by way of claiming that most roadside memorials are erected by traumatized relatives on behalf of teenaged drivers and drivers in their twenties who were irresponsibly texting when they ran their car off the road and flipped it over in a ditch. There are scant statistics available to support such a claim, though a deep dive into state Department of Motor Vehicles (DMV) websites may turn up a breakdown of accident causes or contributing factors. Mainly it is speculation to suppose distracted driving may have been a primary cause of any accident marked by a roadside memorial. While texting is a phenomenon of the past 20 years, and as such coincides with the increase in roadside memorials, there is nevertheless a logical fallacy described in Latin as “post hoc, ergo propter hoc”, meaning “after this, therefore because of this”. Still, the coincidence bears consideration.

As a matter of personal experience, however, anyone who has been driving the past 20 years cannot help noticing the increase in distracted driving around them. Sitting at a red light behind a driver who is mesmerized by his or her phone means waiting extra seconds before accelerating after the light turns green, or even having to honk the horn to rouse that driver from smartphone induced hypnosis. Driving on a road behind or next to a texting driver means being alert to his or her sudden and unexpected accelerations and decelerations of their vehicle and jerking it from side to side, behavior that is exactly the same as a drunk driver. Getting out in front of a texting driver is not entirely safe either, as is obvious by glancing in the rear view mirror at the texting driver looking down toward his or her lap rather than up toward the road and the back of the car, your car, that they are dangerously closing in on.

A 2012 experiment in Belgium to demonstrate the dangerous foolishness of people who believe they can drive competently while texting. For additional views on the casualties of texting and driving, see the 2013 Werner Herzog documentary From One Second to the Next.
As they drive past a roadside memorial bedecked in flowers and balloon hearts and teddy bears, motorists reflecting on its meaning have no idea whether the memorial is for an irresponsible driver or the innocent victim of that driver, any more than a person walking through a cemetery knows the particulars behind the deaths of the people marked by the tombstones over their graves. If the driver thinks for a few seconds about how quickly life can be snuffed out, whether by foolishness or merely by bad luck, and checks their vehicle speedometer and puts their phone away in the glove compartment, then maybe the roadside memorial has served a good purpose after all. Taking it easy and laying off the accelerator and the constant jonesing to communicate, even though it be about nothing of note, maybe the driver reflects upon seeing the roadside memorial and thinks “There but for the grace of God go I”, and gets home safely.
— Ed.