February 20, 2018 Vita Historia
There was a time, thirty and more years ago, when late night television struck a delicate balance between light entertainment and interesting conversations with political and media celebrities in a talk show that was perhaps taken for granted at the time and has not been repeated since, namely The Tonight Show Starring Johnny Carson. In the time since, there have been other late night shows which touched on some of the same notes, particularly the ones hosted by David Letterman, but none have reproduced the entire formula, if indeed they were even trying. Since 2016, reruns of The Tonight Show have been airing, and viewing them is a revelation in comparison to the shows currently airing. 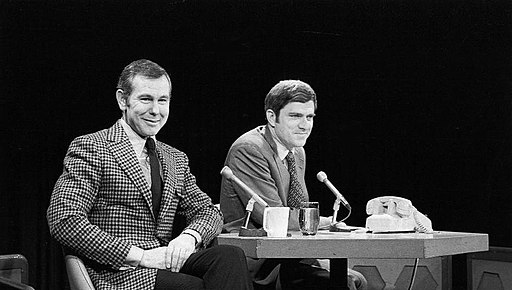 Johnny Carson appeared in August 1970 as a guest on the syndicated daytime talk show The Phil Donahue Show. Phil Donahue, on the right, talked with a wide variety of guests, much like Carson did on his show, with the difference being that Donahue often went into greater depth in his interviews, many times having only one guest on for an entire hour long show. Photo by Rollyn Puterbaugh.
Late night television talk shows have never been a fountainhead of intellectual conversation, but compared to what passes for conversation on today’s shows, the talk shows of the 1950s, 60s, 70s, and even 80s could almost pass for Socratic dialogues. Perhaps with the atomization of media into YouTube and social media outlets, where people can select snippets of the shows they want to watch, having long form dialogues between host and guest is no longer salable. In that case, it’s hard to say whether the fault belongs with the audience or with the purveyors, or even whether either party sees assigning blame as necessary. Maybe they are all happy with the new situation.
Thanks to the same internet media outlets which have served the short, snappy comedy bits on the new late night talk shows well, many of the older shows which have a more limited audience, such as the earliest Tonight Show episodes hosted by Steve Allen, Jack Paar, or Johnny Carson, are available for those who know where to look. Meanwhile, for those less internet savvy, there are reruns of The Tonight Show Starring Johnny Carson available on select television outlets around the country.

An appearance by the Smothers Brothers on The Tonight Show Starring Johnny Carson in January 1991 exemplifies the kind of classy, understated comedy rarely seen since then on the late night talk shows or anywhere else on television.

It’s interesting that a talk show, of all formats, can hold up to scrutiny from thirty years on, because much of the political jokes and movie and television show plugs from the era of original airing have of course dated, and some may even be incomprehensible to many viewers now. What makes return viewing worthwhile is the charm and charisma of the host, Johnny Carson, in relating to his guests; the polish of the show’s production and its good natured sensibility; and the view into a world which expected a little more from its viewers in the form of attention span and intellectual capacity than what is expected today by most of the late night television media, never mind the distorted mirror held up to our society by the trashy daytime shows which we acknowledge with revulsion or delight, depending on our point of view.
— Vita