The Tenor of Our Times

February 18, 2018 Editor
Schadenfreude, a German term for taking joy in the misfortunes of others, has unfortunately become a predominant emotion in the public spheres of politics and media. After the 2016 election, some Republicans took more joy in the losses experienced by Democrats than in their own victories. There’s a difference there of feeling something based in negative views or in positive views. The experience of Schadenfreude also has shades of feeling, depending on whether the person laughing at someone else slipping on a banana peel is also the one who threw the peel to the ground.
In the first instance, the person is merely an observer, though that person’s laughter at another person slipping on a banana peel may be tinged with additional shades of meaning based on whether the two had any kind of relationship or whether the laugher’s joy comes from a pathetic affirmation of scorn for the unfortunate and a consequent boost to the laugher’s own low self-esteem. It is laughing at someone else’s expense in order to feel better about oneself. Throwing down the banana peel of course adds agency to the scenario, and more if it was done with the intention of victimizing another. The nasty twist comes when the person throwing down the banana peel manages to feel justified by claiming victimization from the person who will slip on it, and therefore in their eyes the person who slips gets just desserts. That is the scenario playing out in public discourse every day now. 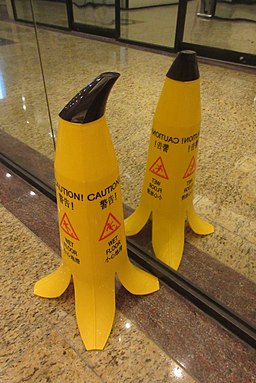 A “Wet Floor” sign shaped like a banana peel at a shopping mall in Hong Kong in October 2017. Photo by Zhungwinsumtz.
It’s not hard to find examples, from the fallout of mass killings to the investigation into Russian election meddling; from hateful rhetoric about immigrants to hate crimes against brown-skinned people; from disparagement of liberal attitudes to intimidation of groups and individuals associated with those attitudes, such as Black Lives Matter or Gay Pride; and all of this done with the justification of being the victim. Not everyone who claims to be a victim seeks to redress the wrong they feel through negativity, an example being the civil rights movement of the 1950s and 1960s, in which positive attitudes prevailed despite horrifying provocations. Many of the people claiming victim status now as justification for their Schadenfreude, for their trolling of others by tossing banana peels, do so with spurious reasoning springing from self pity over the degradation of their imagined superiority. Claiming their superiority came from God or some other vaunted source and that its erosion by societal forces is evidence of evil at work is magical thinking, and it is damaging everyone.
— Ed.