February 16, 2018 Isidore Gnome
“In the sweat of thy face shalt thou eat bread, till thou return unto the ground; for out of it wast thou taken: for dust thou art, and unto dust shalt thou return.”
— Genesis 3:19, from the King James Version of the Bible.

Scientists working at Rockefeller University in New York City have isolated a soil bacterium which shows the ability to destroy illness causing bacteria that have developed resistance to other antibiotics, notably the type known as Methicillin-resistant Staphylococcus aureus (MRSA). MRSA has been the scourge of nursing homes and hospitals for decades now, where opportunistic infections kill patients weakened by age and other illnesses, and treatment with antibiotics has become ineffective. The discovery of the new antibiotic, called Malacidin, is a major development in the fight against bacterial infections and diseases, which has seen little progress over the last 30 years. 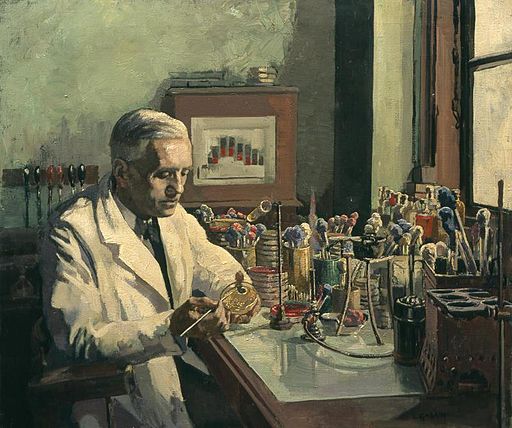 A 1944 illustration from the British Imperial War Museum depicting Sir Alexander Fleming at work in his laboratory 16 years after his discovery of the first antibiotic, Penicillin, in 1928.
The breakthrough is the result of an alternative approach to the standard tedious practice of testing antibiotics one at a time against various illnesses, and instead used computers to look at vast numbers of soil microbes for certain antibiotic characteristics and then narrowed down the search progressively. To cast this wide net, the Rockefeller University scientists requested the help of volunteers from around the country in submitting soil samples. The scientists particularly requested soil samples from out of the way places, reasoning that they were more likely to find microbes there for which illness causing bacteria like MRSA had not developed resistance. Places like agricultural fields are more apt to have the usual microbial soil life that has already been tested and tried because it has been in the human food chain for generations.
All of this serves as a reminder that the humble soil beneath our feet is the start and the end of everything. Food, disease and the medicine to fight disease, the foundations of our dwellings, all of it starts and cycles through the soil. Taking care of the soil is taking care of ourselves. Showing no concern for the long term health of the soil and the life inhabiting it by dumping salt producing fertilizers on it year after year in a short term effort to boost crop yields ultimately destroys ourselves because such practices destroy the life in the soil. It becomes sterile, reliant solely on a chemical stew of fertilizer that offers no substantive nutrition. It becomes like the Petri dishes that scientists struggled for years to get soil microbes to grow in, largely unsuccessfully. Now scientists are trying new methods that work within healthy soils, and they are achieving greater success. It’s a continuing battle against newly resistant bacterial strains, but without a reservoir of healthy soil to draw antibiotic reinforcements from the war would already be lost.
— Izzy