Home of the Brave

January 21, 2018 Editor
It’s not easy leaving one home for another one far off, as anyone who has ever done it can attest. If moving thousands of miles away from family and friends is difficult now, when electronic communication allows people to keep in touch, it was even more difficult in past centuries, when leaving behind familiars often meant permanent dislocation without any further contact. The emigrants, particularly if they were poor, had to be brave to make the momentous decision to leave, and then again to establish a new home.
Economics and politics are the biggest drivers of emigration, even for those leaving the United States. American government agencies don’t keep exact numbers on the amount of people leaving the country, but estimates over the past twenty years are that the number of Americans living abroad either on a temporary or permanent basis have more than doubled, from four million to nine million. People who live abroad temporarily, but longer term than tourists, are considered expatriates. The status of expatriates is usually fluid, with some eventually becoming citizens in their adopted country, and some returning to the United States. 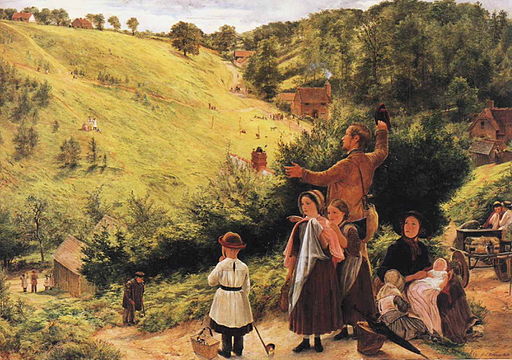 The Emigrants’ Last Sight of Home, an 1858 painting by Richard Redgrave (1804-1888).
As hard as it is to pin down statistics on American expatriates, it seems a reasonable inference from the increasing number of articles published online and elsewhere touting overseas retirement destinations that more Americans than ever are deciding to live abroad when they have a fixed, mostly predictable income. For some of these people, the political situation in the United States may play a role in their decision, as this country more and more resembles the banana republics derided in the past, with obscene income inequality, police state tactics employed by the governing class, and the mass of people working in a condition of debt peonage. Many of the countries listed as desirable retirement destinations are in Latin America, and the reasoning among retirees may be that since the United States has come to resemble those countries politically, at least the change for them won’t be that great on that account, and their money will go further.

It’s more complicated than that, of course, because for centuries the United States interfered in the politics and economics of Latin America, which it regarded patronizingly as its back yard. Latin American countries have lately been working to disengage themselves from the most sordid aspects of American interference, with the most extreme example being Venezuela. At any rate, Latin America is popular amongst expatriate American retirees looking to get the most out of their pension dollars. Europe is generally more expensive, with the more dysfunctional economies of southern Europe offering better deals. Southern Europe also offers warmer weather and high quality health care that is on a par with the rest of Europe. American retirees are more likely, therefore, to emigrate to the sunny beaches of Spain than the frigid fjords of Norway.

Director John Huston, an American expatriate for much of his life, in a cameo appearance early in his 1948 film The Treasure of the Sierra Madre, with Humphrey Bogart. The film was about a trio of down on their luck American expatriates in Mexico. Poverty is a miserable existence anywhere, but it causes even more anxiety among those who are adrift from the support of friends, family, and familiar surroundings.
The magazine articles for retirees typically mention a few destinations in southeast Asia, and hardly any spots in Africa or the rest of Asia. Presumably the heavy slant toward Latin America and Europe is because those places offer less of a culture shock to most Americans along with the aforementioned economic advantages and similar political climate. That slant also assumes the major part of the readers are of Caucasian European descent, which is not unreasonable considering American demographics, particularly of the middle class that can afford a comfortable retirement, or at least expects to do so if they can stretch their dollars overseas. Their numbers are increasing.

The propaganda in this country has long been that everyone in the world wanted to come here, and that we could pick and choose who got in. With some quibbles, that was mostly true for a long time. Now that may no longer be the case; now not as many people elsewhere may be attracted to these shores, while more people here may be looking elsewhere. For now, it is the people with dependable income, retirees among them, who are leaving. They are the brave ones, and as the political and economic situation in America swirls down a dark hole, and despite the ever more shrill propaganda about how everything is great, just great, more will surely follow to make their home elsewhere.
― Ed.