January 9, 2018 Isidore Gnome
There’s a movie out recently starring Hugh Jackman as the 19th century impresario P.T. Barnum, and it’s called The Greatest Showman. The script appears to play fast and loose with history, for one thing imposing a modern sensibility about sideshow freaks on people like Barnum perhaps, and on many in Barnum’s audiences certainly, who would have found modern ideas about respect for diversity bizarre and laughable. We, of course, have come around to feeling the sensibilities of people in the past regarding respect for diversity and individual rights were bizarre and cruel. It’s not clear from a review alone if the movie takes the same anachronistic approach to respect for animal rights.
In the last year, after many years of criticism of it’s inclusion of animal entertainment acts in its circus, the Ringling Brothers and Barnum and Bailey Circus folded its tents for good and went out of business. The criticism led to steadily declining ticket sales as well as loss of revenue from being shut out entirely from some localities where legislation had been enacted to ban the kind of animal entertainment acts that had long been part of circuses, even before P.T. Barnum came along with his great showmanship. 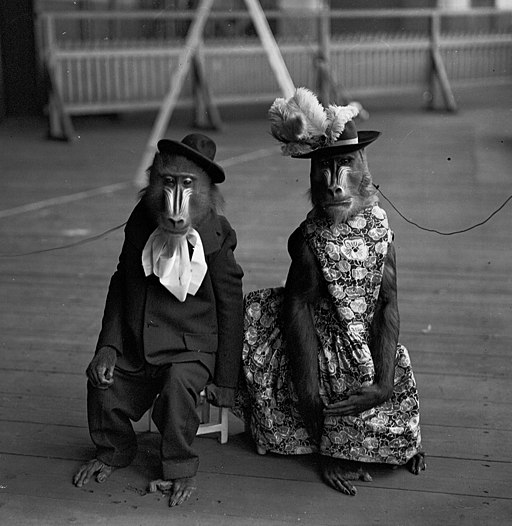 Jacko and Bess, two mandrill monkeys with the Olympia Circus in December 1931. Some people find this sort of thing entertaining. Note the leashes. 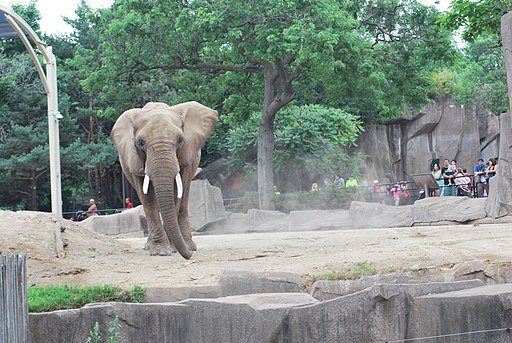 An African elephant at the Milwaukee County Zoo. Photo by Ronincmc.
Zoos may start closing in large numbers soon, after several of them around the world closed in the past decade, citing the hypocrisy of pretending zoos provided means for animal conservation and public education, when really they represent a more staid form of the entertainment seen in circus animal acts. Zoos have always dressed themselves up in a veneer of respectable science, often with little evidence to back it up. Zoos have played Dr. Jekyll to the Mr. Hyde played by the rest of humankind in its voracious appetite for resources and habitats, displacing and killing wildlife at will. It’s past time to go beyond trying to conserve wildlife from the rapaciousness of Mr. Hyde and to stand up to him and then relegate him to irrelevancy. Meanwhile, no one asked the animals what they wanted, but it’s clear from the more expressive of them that they are miserable in their zoo enclosures, however well disguised those are from steel cages.
These are steps in the right direction, and naturally it will take some time to redress the other wrongs against animals that people have perpetrated through malevolence, neglect, and a misguided sense of divinely bestowed dominion. At the same time that many people treat their pets, mostly dogs or cats, very well indeed, there is a whole revolting system of inhumane factory farming of animals for meat and other animal products that goes on largely ignored by the general public. Out of sight, out of mind. People will sometimes wonder how the Germans and the Poles could have turned blind eyes to the shipment by trains through their villages of millions of Jews bound for the gas chambers during the Holocaust. Surely they had to have noticed, and the claims by some of them that didn’t are self-serving lies. Maybe so; but then look what goes on across the United States and, increasingly, other parts of the world every day in order to feed the rising demand for meat with every meal. Or don’t look. 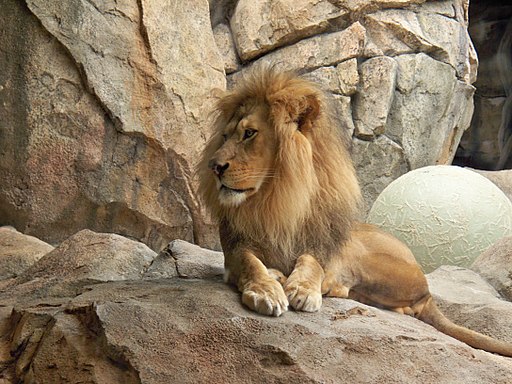 A lion at the Milwaukee County Zoo in June 2010. Photo by Antigrandiose.
Companionship with a pet is a fine thing, beneficial to human and animal alike when the animal is welcomed as part of the family. From that point on there is a sliding scale measuring the relationship of animals to humans, continuing past domesticated animal likes cows and pigs to partnerships like that with honey bees, and on to the last type of relationship, that with wildlife, which in its ideal state would be one of mutual respect and staying out of each others’ way. There used to be a television program sponsored by an insurance company called Mutual of Omaha’s Wild Kingdom, in which the host and his trusty assistant were forever tranquilizing wild animals and then affixing a radio collar to them before letting them go. The people troubling the animals in this manner meant well, and they were doing it all in the interests of science and of the animals themselves, but another concept  seems to have never come up, namely leaving the animals be. There have been many other nature shows since, and thankfully some of them have grasped that concept: How about if we just back off, let these animals have the space any of us have a right to, and leave them the hell alone?
― Izzy