January 5, 2018 Vita Historia
“A lie keeps growing and growing until it’s as plain as the nose on your face.”
― spoken by The Blue Fairy in the 1940 Disney film Pinocchio.

This coming Monday at 5pm, Supreme Leader has promised to announce the winners of the Fake News awards, according to him. Media personalities are lining up for the most prestigious of the Fakies awards, because to be called a liar by the biggest liar of them all is quite an honor. Stephen Colbert of the Columbia Broadcasting System (CBS) talk program The Late Show has taken out an ad in New York City’s Times Square to promote himself and his show for Supreme Leader’s top honors. This is becoming a big deal.

The enemy of my enemy is my friend – that’s the operating principle here. To be called out for Fake News by the biggest liar in the country is not only praise of a kind, but an endorsement. And now Supreme Liar will be bestowing awards of some sort on the highest honorees, though what that might be he has not made clear yet. Suffice to say that any news organization would be satisfied with the honor alone because of the boost to their ratings or readership, never mind the additional prestige. This must have been what Supreme Egotist meant in his recent New York Times interview when he suggested the media needs him around for the re-election campaign in 2020 to boost their income.

Awards and trophies have been a part of western civilization for millennia, at least since the ancient Greeks gave out laurel wreaths and cash gifts to winning Olympic athletes. In the twentieth century, the awards and trophies business really took off since entertainment businesses in particular found out giving them away in publicized ceremonies was a great way to let the tasteless public know what publications, movies, television shows, what have you, had the imprimatur of good taste from supposed authorities within the business, raising more revenue from the public, who now knew how to impress their friends and neighbors when they bought culture. 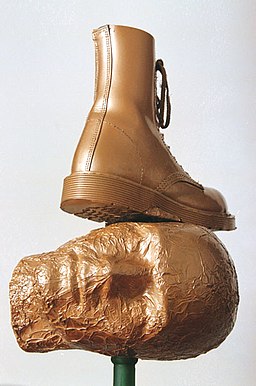 The Big Brother Award from the United Kingdom based organization Privacy International. Near the end of George Orwell’s dystopian novel 1984, the representative of state power, O’Brien, says to the protagonist, Winston, “‘If you want a picture of the future, imagine a boot stamping on a human face – forever.'”
The Fakies, as proposed by Supreme Dotard, promise something a little off kilter from the usual awards bestowing because they will be more in line with the Razzies, an anti-award for bad movie making. But since the Razzies awarders do not take themselves or their task too seriously, there will still be a difference in solemnity between the granting of Razzies and that of Fakies, because the awarder of the latter prizes takes himself all too seriously, as do many of his more die hard supporters. There are the cynical supporters among the upper classes who were only interested in seeing through the enactment of things like the recent tax cut package for themselves and their rich friends, and then there are the true believers among the lower classes who are mainly in it to spite leftists, with their definition of leftist being anyone to the other side of Dwight Eisenhower, who if he were alive today would himself be suspect.

The great Spike Milligan accepted a lifetime achievement award in 1994.

One important point that needs addressing here is that this very website has been first and foremost in denouncing the regime of Der Lügner since it started, and should therefore be in line to receive a Fakie as a promulgator of Fake News by light of how the regime judges these things. If this website receives a Fakie on Monday, rest assured the glow of its bestowal will shower contributors and readers alike with a penumbra of honor from an unimpeachable source – or an impeachable one, as may be the case.
― Vita