Words from the Unwise

December 31, 2017 Isidore Gnome
This past year the editors at the Merriam-Webster Dictionary added “word salad” to their list of terms since it has been in the news lately as a way of describing how the current president speaks. It’s a term that is not quite the same as “gobbledygook” or “gibberish”, two older words used for describing nonsense language, the first in writing and the latter in speech. “Word salad” leans more toward describing the nonsensical speech of the mentally ill, and a more technical term for it in that case is aphasia, the jumbling together of discrete words and phrases such that the whole becomes incoherent.

To gain an understanding of what word salad is while steering clear of the real thing as uttered by the current president, which can imperil your well-being, listen to this approximation from the “Word Wizard” segment of the Bob and Ray radio show.
When Sarah Palin appeared on the national scene in 2008, people described her way of speaking as “word salad”, and that first gave the term widespread attention. Now the current president has become the best known spouter of word salad, and it has become difficult for the unfortunate citizenry – who already have enough awful language usage to deal with – to listen to the news on radio or watch it on television without being subjected to it and its brain scrambling effects. Reading a literal transcription in a newspaper or online can be even worse, because the human brain tries harder to make sense of words in print, while it has an easier time tuning out auditory nonsense as so much “Bwah, bwah, bwah” noise, like that made by the adults in the Peanuts television specials, where the sound effect is created using a muted trombone. Concentrating on word salad in print can be detrimental to a reader’s mental health, or at least cause a bad headache. 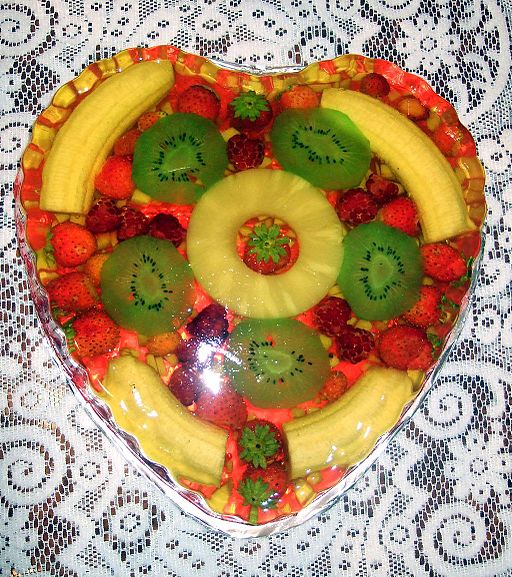 Heart shaped jello salad from Yerevan, Armenia. Photo by Chaojoker.
Aaron Copland borrowed the melody from the 1848 Shaker song “Simple Gifts” for part of his score to the 1944 Martha Graham ballet Appalachian Spring. This rendition is from a 2001 album by cellist Yo-Yo Ma, and is sung by Alison Krauss.
Stay safe in the new year and avoid consuming word salad in any form. Peace.
― Izzy