Joy in a Toy

December 29, 2017 Techly DoRight
With Christmas past by several days now, many children will be enraptured by a new toy or toys if they were lucky enough to receive them. The trend now is for giving more technologically sophisticated toys even to small children, but a simple toy such as a rubber duck can give a small child many hours of joy through encouraging the use of imagination, while some complicated toys do everything for the child, who quickly becomes bored through passivity.
For such a simple toy, the rubber duck has become enormously popular since its introduction in the form we recognize today in the mid-twentieth century. Some rubber ducks squeak when squeezed and others don’t, but all are hollow with a weight in the bottom, so that they always float upright. Of all toys in America, perhaps only the teddy bear is more popular than the rubber duck. A teddy bear does even less on its own than a rubber duck, however, since some won’t float, and it certainly doesn’t know which end is up when it does float. 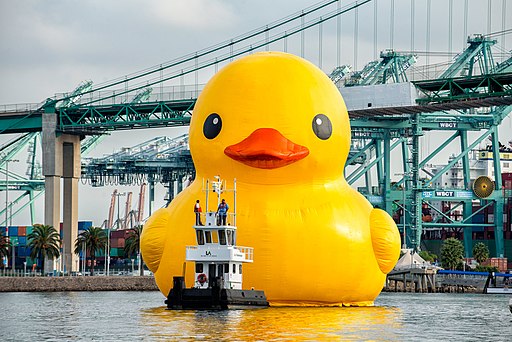 The world’s largest floating rubber duck, designed by the Dutch artist Florentijn Hofman, is towed in Los Angeles harbor in August 2014 as part of the Tall Ships Festival. Photo by Eric Garcetti.
The technology employed in making rubber ducks is some of the simplest in manufacturing, involving rotational molds, heat, and some hand painting. The toys are not made of rubber anymore, since that has gotten too expensive. Manufacturers instead use a non-toxic vinyl which will be safe for toddlers, who inevitably will chew on the toy. The paints also are designed for child safety. Like many manufacturing plants in the past half century, the ones for making these simple toys had moved overseas, primarily to China, until one company returned part of its manufacturing to the United States. That company struggled at first to find a factory and skilled workers, evidence of how quickly disused facilities and worker skills melt away without investment.

For all the stories in the news about how Silicon Valley technological companies like Apple and Google are leading the way for the American economy, and how the less educated workers who don’t fill that mold will just have to make do with minimum wage jobs in the service economy, flipping burgers at McDonald’s or driving Ubers, there are millions of workers who are not cut out to be software engineers but who nonetheless could use better paying jobs to help their families not merely stay afloat, but get ahead in the world.

In this clip from an early episode of Sesame Street, Ernie the Muppet sings “Rubber Duckie”, the 1970 song that set off a resurgence in popularity for the toy.
These are people who may never invent the next big thing in computers or smartphones or driverless cars, but whose children possibly could if given a fair chance at a good education without sinking the family into poverty. In the last fifty years, while the rich in their opulent yachts have gotten ever richer, the working class has been cut adrift from the mainstream economy by the loss of good paying manufacturing jobs, and the middle class has been kept busy furiously kicking to keep from drowning. Not everything has to be complicated or technologically sophisticated to work well in the world. Sometimes all it takes to make people happy is a simple toy that knows enough to bob upright in the water and keep afloat with a plucky smile.
― Techly