I’m Not a Cook, But I Watch Them on TV

December 22, 2017 Isidore Gnome
At a time when cable television shows are promoting cooking, and cooking in superbly designed and equipped kitchens, like never before, Americans are cooking at home less than ever before. In this sense of cooking, throwing a prepared meal from the supermarket into the microwave, oven, or a frying pan does not qualify. Cooking means readying and blending raw or minimally prepared ingredients in such a way as to constitute a full meal. Cooking in this sense refers to how many households prepared dinner, if not breakfast or lunch, forty or fifty years ago.

For dinner at least, the American home cook of 1960 or 1970 visited the grocery store to pick up ingredients in the produce department, usually the meat section, and perhaps the middle aisles for flour, sugar, spices, and canned goods. The home cook of that time rarely picked up things from the frozen food section, and then only basic ingredients like frozen vegetables instead of any of the frozen meals, of which the selection would have been limited anyway. At that time there were only a few cooking shows on television, and those, such as Julia Child’s show, were buried on public television where relatively few people saw them. Home improvement shows with their enormous kitchen remodels hadn’t even shown up yet, and wouldn’t do so in anything like their current form until the 1990s. 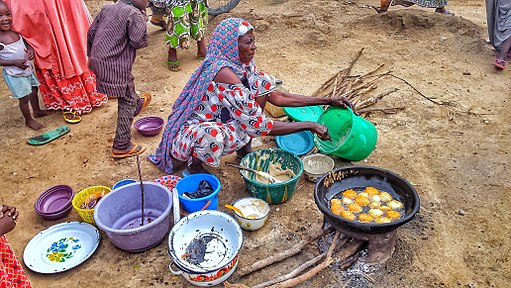 African woman frying bean cakes at a roadside. Photo by IKoye.
In the years since the 1960s and 1970s, home cooking has dropped off considerably, and at the same time interest has risen in TV cooking shows and home improvement shows that feature enormous, professionally equipped kitchen remodels. It’s comical to watch on television these upper middle class couples with too much money tour homes that have kitchens large enough for the staff of a small restaurant, and which statistics about current trends and your own instincts as a viewer tell you the couple will never need nor use to its full capability, and to see them ooh and aah over it as if it’s perfect for them. These shows seem to be more about fantasy wish fulfillment than realistic expectations, and the same dynamic appears to operate for the cooking shows which have taken over cable television.
At a time when over one billion of the world’s population goes hungry, Americans are enthralled by television shows which detail how to prepare rich and intricate dishes, often with elements of stressful drama added for no reason other than to intensify viewer engagement in an otherwise prosaic process. This is perverse. Few of the viewers will actually attempt to make the dishes themselves, but that is besides the point. It is like the expensive and needlessly over-equipped kitchens on view on the home improvement programs. It is a sort of pornography. Those in the lower classes might wish they could make those fancy dishes in those elaborate kitchens. Those in the middle classes might ponder that with a home equity loan the kitchen would be possible for them, and then what times they would have in it, cooking and entertaining!

Julia Child, the original television cook, demonstrating on her public television show The French Chef that perfection is not always possible, and that’s alright.

The upper classes, of course, find all of this unnecessary, because they have, as they have always had, people to do all of this for them. As long as they can come down to the kitchen at midnight and find the makings for a sandwich on their own, they should be okay with any kitchen, however elaborate. The real target of these television programs, both the debt-inducing kitchen remodels and the guilt-inducing cooking shows, is the middle class, and especially those already in the upper middle class or aspiring to make it to those heights. What’s the point? Spend money, even money you don’t have, to become part of the People Living the Good Life. Eat well, even if you have to pretend to know how to do that. There’s no need for all these cooking shows. A few would suffice. Instruction in cooking for a good life doesn’t need hours upon hours of elaboration and drama; cooking to impress others with your station in life apparently requires whole cable television channels.
― Izzy