The Proof Is in the Printing

December 19, 2017 Techly DoRight
When a computer printer works as it should, smoothly turning out page after page and photo after photo, it’s a wonderful thing that is easy to take for granted. But when that printer acts up and doesn’t feed pages or photos properly, or prints unevenly in streaks even though it has full ink cartridges, then a user’s patience can be stretched to the limit of frustration. Unlike the computer a printer is often connected to, a printer has a lot of moving parts, and that is typically the source of their malfunctions.

Since a home user likely has an inexpensive inkjet printer, replacement of the entire unit is usually preferable over any repair that will get time consuming and therefore expensive. The cost of such a printer is subsidized by purchase of proprietary ink cartridges at inflated prices, which is an economic model a bit like cell phone subsidizing through service contract, but not quite. In the case of a cell phone being available at a nominal initial cost while the complete cost is spread out over the term of a two year contract, the user of the phone is the one and only subsidizer. With printers, the artificially low cost of many of them is subsidized by all the users of the ink, and the heaviest ink users do the most to support the cost of printers for everyone.

If people had to pay the full cost of a printer, they might have a better understanding of the value of these remarkable machines. Like computers, printers that fit on a portion of a desktop now are doing the work that machines in earlier times did while taking up a full room. The inflation adjusted price has also gone down over time, and really the comparison of technological capability does not hold up beyond basic numbers in saying that a modern desktop printer or computer can do the same work as room size machine of fifty years ago. The new machines can do much, much more. 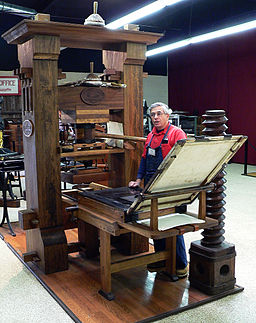 Peter Small demonstrating the use of the Gutenberg press at the International Printing Museum in Carson, California, in 2009. Photo by Flickr user vlasta2.
What appears to make a printer a special object of loathing when it doesn’t work as it should is the usually mechanical nature of its breakdowns, something that people have a visceral understanding of, rather than the electronic or computing problems of a computer or its hand held cousin, the smartphone, which many people find inaccessibly difficult. When a printer’s paper feed mechanism breaks down and starts chewing up pages, leaving a crumpled mess stuck partway in the printer’s maw, it’s like a willful dog has chewed up our slippers. We can understand that, and it taps into an older, simpler part of our brains than the aloof error message we occasionally see on a computer screen.

In this scene from the 1999 dark comedy Office Space, written and directed by Mike Judge, a few workers take out their frustrations on the temperamental office printer, a stand-in for their frustrations with their workplace generally. Warning: foul language.

This time of year, Christmas, can be especially perilous for an inexpensive home inkjet printer to get glitchy. People are trying to print out photos for their Christmas cards, invitations for parties, and year end summations of their activities and personal growth to include in Christmas cards. In addition to the increased demand on their services in the lead up to Christmas, another danger to marginally useful printers is the frazzled, harried state of mind of their users during the year end holiday season.

No, a printing machine at Christmas that has started to show its age and groan with mysterious mechanical aches and pains is more likely to end up getting recycled by a user whose patience is at an end, rather than get repaired and restored to tip top condition. The latter outcome would be more likely if the printer was valued at its true price. Instead, the home user will replace it with a new printer promising two or three years of trouble free operation. The lesson there for the home user is that inexpensive inkjet printers are a reasonable investment for light use, but people who print a lot are better off with a more expensive machine that reflects its true value, is worth repairing, and relies on a fairer economic model than the highly subsidized market for ink.
― Techly