Benjamin Franklin Would Not Be Proud

December 15, 2017 Editor
With each successive year, the United States Postal Service shows more cracks in its structure, and at no time of year is that more evident than around the year end holidays as letter and package volume increases. It’s difficult to find empirical evidence of the Postal Service’s failings as a delivery service, though anecdotal evidence is plentiful. Just about everyone has tales to tell of late delivery, non-delivery, delivery to the wrong address, or failure to pick up mail. If it seems these failings are increasing, that’s more than likely an accurate assessment because the United States Postal Service is beset both from within and without.

The Postal Service as originally designated in Article I, Section 8, Clause 7 of the Constitution, says nothing about profitability of the Service, only that it is a necessary manifestation of interstate commerce and communication. The Founders recognized it as a public utility, in other words, not a business for private profit making as much as a service for the benefit of the public, with all the implications for public subsidy that can entail.

Along the way from 1775, when the Continental Congress appointed Benjamin Franklin the first Postmaster General of the fledgling United States of America, some right wing factions got the idea that the Postal Service should behave as a quasi-private business still under government control. They got their way first in 1971 when the Postal Service was transformed into an independent agency under the Executive Branch, and then even more importantly in 2006 after Congress passed legislation requiring the Postal Service to fully pre-fund employee retirement health benefits, a requirement which has hamstrung the Service financially ever since. 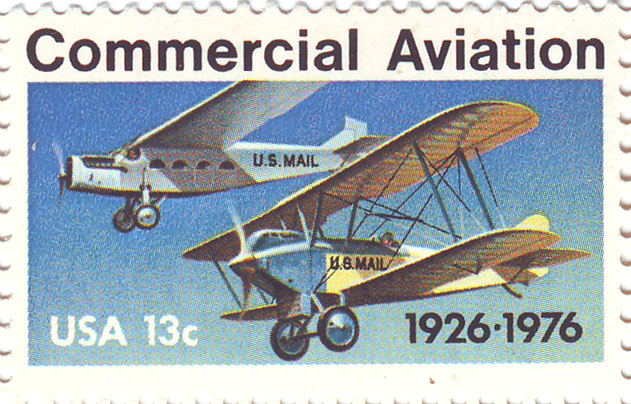 U.S. postage stamp issued in 1976 honoring the 50th Anniversary of U.S. Commercial Aviation (1926-1976). Illustrated are the first two airplanes used to carry Air Mail under contract: Ford-Stout AT-2 (upper) and Laird Swallow (lower). Federal Air Mail contracts provided important sources of revenue to early aviation companies, including Eastern Air Lines.
Hamstringing the Postal Service was not an unfortunate unintended consequence of fiscal responsibility measures, but a deliberate step by Republican legislators to ensure the eventual failure of the Postal Service so that its carcass could be picked over by private businesses, with the choicest bits going to the highest bidder. Less choice bits, like mail delivery to remote outposts around the nation, would most likely be ignored, with a consequent loss of mail service to those places. Sorry, not profitable. Travel half a day to the nearest small town to pick up your mail at a privately maintained postal outlet. Sending a letter to that remote outpost? Sorry, flat rate postage no longer applies for first class delivery. That will be ten dollars, please.

Besides being attacked from the outside by vultures, the Postal Service has been hampered lately from within by a toxic work environment fostered by bad, unaccountable management which has led to chronic staff shortages around the country even when the troubled economy would dictate that people would flock to Postal Service jobs that are relatively high paying, with better benefits than most other employers offer. Word gets around, however, and eventually people become reluctant to apply for those jobs regardless of the monetary rewards. Meanwhile, attrition combined with the depressing, hostile work atmosphere saw to it that valued senior employees took early retirement or simply quit to get away from the place. If Congress ever gets around to convening an investigative commission, Postal Service managers will have a lot of explaining to do.

In the 1947 film version of Miracle on 34th Street, starring John Payne as attorney Fred Gailey and Edmund Gwenn as Kris Kringle, the Post Office (as it was known then) was a respected institution.

In the meantime, try to be kind to your local mail carrier, who is only trying to make the best of a bad situation and, if possible, get home at a reasonable hour. Post Offices are short of staff, and mail sorting centers have been closed in the past ten years in a short-sighted attempt to save money, resulting in long hours for many mail carriers. Working after dark in the evenings has presented a whole new set of dangers to these people, from urban carriers walking a route being mistaken for prowlers to rural carriers in outmoded vehicles with only two weak hazard lights blinking to warn other drivers on dark country roads that they are sitting ducks as they move from box to box at low speed delivering the mail.

These are unnecessarily dangerous conditions for the carriers on their appointed rounds, and then to be confronted with bullying managers back at the Post Office when they’re finally done with their shift is too much. Something has to change at the Postal Service, starting with the top, but the first shove has to come from what corporate and political America considers the bottom, which are the customers who expect good service from their mail carriers, if only managers and legislators would either do better jobs supporting them or get out of the way and stop actively obstructing them.
― Ed.