Shave and a Haircut

December 10, 2017 Techly DoRight
Two bits! There, that feels better now, doesn’t it? A sense of completion and the comfort of familiarity. The phrase “two bits” indicates twenty-five cents specifically, and can also mean something cheap generally. The digital currency bitcoin apparently derives its name from the old fashioned uses of “bit” to indicate parts of a dollar or other currency. At the current exchange rate of around 15,000 dollars to one bitcoin, however, a bitcoin itself represents anything but parts of a dollar. Quite the opposite.

From the 1988 film Who Framed Roger Rabbit, the irresistibility of finishing off “Shave and a haircut, — —-“.

The record high valuation of bitcoin may not stand for long, and in six months one bitcoin may be worth 30,000 dollars or it may be worth 150 dollars. No one knows for sure, and that’s what is fueling a lot of argument and speculation. High amounts of speculation in the market are what inflates a bubble, and the question with bitcoin is whether it is indeed a bubble and when it might burst. That generates more speculation. More small investors buy into the market. Historically what has happened in such cases is that something happens, a large investor or two gets spooked, dumping shares on the market, a selling panic ensues as everyone tries to get out of the market while the watch the value of their investment plummet, and that’s it, the bubble burst.

Bitcoin or something like it will be around for as long as there is an internet and a demand for a monetary barter system which is decentralized and doesn’t involve significant charges going to middlemen such as banks or credit card companies. As more people use digital currency and more merchants accept it in transactions, the volatility of its valuation will settle down. Tulips are still around, after all, and people still value them, just not to the unrealistically high degree they did when the bulbs were novel. The long term problem with digital currencies generally, and bitcoin in particular, will be in decreasing the horrendous energy demands of mining them and, to a lesser extent, processing transactions. The electricity demands of mining bitcoin are now equivalent to those of Serbia, and will soon be on a par with Denmark’s electricity use.

Discussion of whether the current valuation of bitcoin represents a bubble often refers to Charles Mackay’s 1841 book Extraordinary Popular Delusions and the Madness of Crowds, and particularly to Chapter 3, “The Tulipomania”.

Much of the mining occurs in China, using electricity generated by coal-fired power plants. At a time when combating the effects of global warming is becoming a top priority, the mining of bitcoin could present an ecological catastrophe when it reaches the same level of energy consumption as that of the entire industrialized world, as it is predicted to do in the early 2020s. The digital currency genie is out of the bottle, and there’s no stuffing it back in. That leaves two options, or a combination of both – finding more energy efficient ways of mining digital currency, or using more environmentally friendly energy sources, such as solar.

The solar energy option is immediately attractive because it would help defray installation costs of solar arrays more quickly and because poorer countries, which are generally nearer the equator and hence in sunnier climes, could see income from a source that is neither environmentally nor socially destructive the way production of sugar or other cash crops has been for them. Puerto Rico, the United States territory that recently had its conventional power grid devastated by Hurricane Maria, could benefit by rebuilding with the intention of using solar energy at least partially for the profitable production of digital currency. Surplus energy from the arrays built with money from bitcoin mining would power homes and businesses at subsidized rates for people who could not afford it otherwise in very poor parts of the world. Smaller, locally owned solar arrays would be a better way to produce power because of the inefficiency of transmitting solar power long distances either in the form of direct current, or after inverting it into alternative current. Decentralization of the means of production would also serve to keep power and money in the hands of locals. 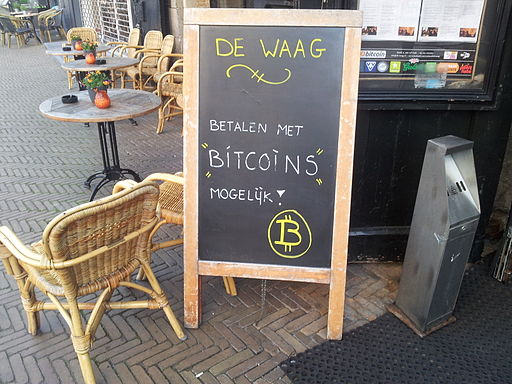 Bitcoins accepted at a café in Delft, The Netherlands, in 2013. The Netherlands became a center of the tulip trade in the seventeenth century during “The Tulipomania”, and remains a primary grower of the bulbs to this day. Delft lent its name to a particular kind of pottery and the shade of blue it is renowned for, which has also been applied to some flowers bearing the same shade of blue. Photo by Targaryen.
Should you invest in bitcoin? That depends on your outlook. In the currently volatile market, investing in bitcoin should be treated like gambling. In other words, don’t invest any more of your government backed (in the United States the currency is actually backed by the Federal Reserve System, a private institution of the banking industry, though it is insured by the federal government) currency than you can afford to lose. For some people that can be quite a lot, but for most people that would amount to very little.

Should you get involved in bitcoin mining and processing of transactions? At the current valuation of bitcoin, that could be quite profitable. Tomorrow its valuation could drop below the cost of the electricity required to mine it. At any rate, the “mining” simile is somewhat inaccurate, since in a comparison of the digital currency market to real world mining, the people with computer equipment engaged in its production and in the processing of transactions are actually more like the merchants in a nineteenth century American mining town who sold goods to the miners who were hoping to strike it rich.

The opening scene of Powaqqatsi depicts working conditions at the socially and environmentally disastrous Serra Pelada gold mine in Brazil. This 1988 film by Godfrey Reggio, with music by Philip Glass, is the second in his Qatsi trilogy of meditative documentaries.

A very few of those miners struck gold, and most went bust, while the merchants usually did consistently well, a few becoming household names still known today, like Levi Strauss. If you do get involved in bitcoin “mining”, it might help to connect the equipment to a solar array rather than the conventional power grid, because then when the bubble bursts and the valuation of bitcoin drops to the floor, you can possibly still operate at a profit when others cannot, or at the very least you will have an inexpensive, environmentally friendly source of power for your other ventures.
― Techly