Prick Up Your Ears

December 3, 2017 Isidore Gnome
It’s hard to fathom how far to the right Republicans in particular, and the country generally, have moved in the past half century that people are surprised to be reminded, or to learn for the first time, that it was the Republican President Richard Nixon who established the Environmental Protection Agency (EPA) in 1970. To be sure, Nixon was no environmentalist, and his establishment of the EPA was in his view a way to steal thunder from his political opposition on the left, where the environmental movement had been gathering momentum since the publication of Rachel Carson’s book Silent Spring in 1962. Nonetheless, he signed the necessary papers and backed the new agency’s initiatives such as the Clean Air Act.
Fifty years later, Republicans abominate the EPA and associated environmentally protected areas around the country. The latest natural areas to come under attack are Bears Ears National Monument and Grand Staircase-Escalante National Monument, both in Utah. The current Republican administration, at the recommendation of Interior Secretary Ryan Zinke, wants to reduce Bears Ears by 85% and Grand Staircase-Escalante by 50%, opening up the areas taken away from them for commercial and recreational use. The executive order mandating the change pleased Utah Republican Senator Orrin Hatch a great deal. The changes will undoubtedly be challenged in court by private environmental protection groups and by Native American tribes in the area. 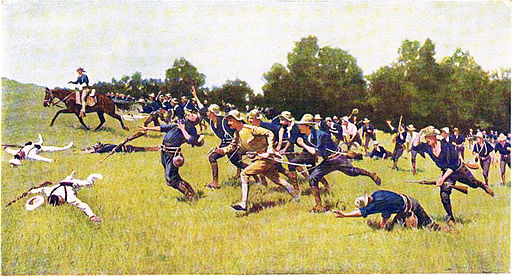 Charge of the Rough Riders at San Juan Hill, a painting by Frederic Remington (1861-1909).
When President Nixon signed the Clean Air Act at the end of 1970, he did so in the White House in front of a painting by Frederic Remington called Charge of the Rough Riders at San Juan Hill, which prominently featured Theodore Roosevelt leading his regiment of volunteers at the 1898 battle. It was not the most politically correct staging of the signing of an important document by today’s standards, considering how the United States merely replaced Spain as the colonial power overseeing Cuba, rather than liberating the Cubans as American propaganda had it at the time of the Spanish-American War, but for the period around 1970 that aspect may have been overlooked by most bystanders to the signing in favor of the possibly intended point of celebrating Theodore Roosevelt and his championing of environmental protection, a first for an American president.
Contrast that rather sensitive staging with the completely insensitive, tone deaf staging by the current administration of a recent ceremony honoring Navajo code talkers and their contributions to American military efforts in World War II. Not only did the ceremony take place in front of a portrait of President Andrew Jackson, infamous for his hostility to Native Americans and for his authorization of the Indian Removal Act of 1830, known as the Trail of Tears, but the current president added a completely irrelevant snide remark that doubled as a smear of one of his political opponents on the left as well as Pocahontas, a Native American woman notable as a mediator with the English settlement at Jamestown, Virginia, in the early 1600s. The current president apparently mistook his comment for wit, because he laughed, while very few others at the ceremony did. Paying attention to the current president’s remarks in person and on Twitter gives us insight into his character, but his actions and his choice and use of symbols speak louder than his words and tell us what he and his administration are actually doing to this beautiful country and its people.
― Izzy 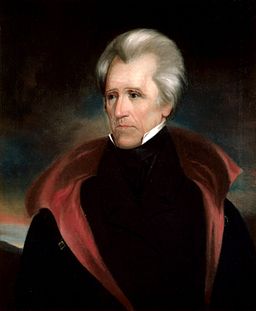