Nearing the end of another NFL season, it’s easy to see how important a quality backup quarterback can be to a team’s fortunes in making it into the playoffs. Sixteen games, some of them on short rest on Thursdays, takes a toll on starting quarterbacks, especially since teams have become pass oriented in the past thirty or more years. When teams ran more than they passed, which was generally the case until about 1980, quarterbacks didn’t take as much of a beating as they do now. The NFL, as it has too often done, tinkered with the rule book at about that time, changing it to favor the passing game and increase scoring. No more low scoring defensive slug fests, if they could help it. Air Coryell, named for Don Coryell, the head coach of the San Diego Chargers from 1978 to 1986, became the model for a new style of NFL play.

The NFL has allowed greed to take the upper hand and has over saturated the market. Player protests against police brutality are the least of its problems, much as league officials would like to blame the protests for all its problems. Slipping in the television ratings started several years ago, before the protests began. The league’s real problems begin with a rule book as complicated as the Talmud, and the rigorous application of all its tenets can slow games to a crawl,  along with all the artificial television timeouts taken to cram in over an hour’s worth of commercials into each game. The game has become a technocratic bore. 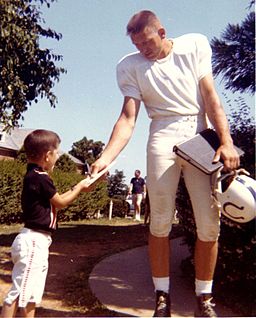 Johnny Unitas signing an autograph at the Baltimore Colts’ Westminster, Maryland training camp in the summer of 1964. Unitas, the starting quarterback for the Colts from the late 1950s to the early 1970s, was often hurt, but his backup many of those years, Earl Morrall, was probably the best in NFL history. Photo by Joel Kaufman.
Speaking of the protests, it seems there is no one around in the media to speak up for the players the way Howard Cosell spoke up for controversial athletes in his day. Mr. Cosell lent a real world perspective to sports that is missing today. Yes, he was bombastic, but the bombast was always mere showmanship, and most people understood that. Some were so irritated by Mr. Cosell that they couldn’t see past his bombast and arrogance, all of it done with a sly wink, and therefore they tuned him out, missing his points about keeping a realistic, adult perspective on sports in the larger world.

Comedian Billy Crystal tells a story about Howard Cosell in this 2013 appearance on David Letterman’s late night talk show.
Howard Cosell was a good backup for his viewers against the more real and destructive bombast and arrogance of NFL owners and marketers, as well as other authority figures in sports and in the politics surrounding it. He would have backed up the players protesting police brutality now similarly to the way he backed up Muhammad Ali when Ali refused to comply with the draft. The league doesn’t always look out for the players’ best interests when they make rules changes and schedule expansions out of greed, and it appears no one in the current media has the stature and integrity Howard Cosell had in the late twentieth century, and will as he did back up athletes when they exercise their constitutional rights as citizens.
― Vita

Howard Cosell guest starred as himself on a 1972 episode of the television situation comedy The Odd Couple, with Tony Randall and Jack Klugman. Ironically, Mr. Cosell was at the height of his fame then largely because of his broadcasting duties on Monday Night Football, which started in 1970, inaugurating the bloat of the NFL into the ubiquitous bore it has become today.