November 26, 2017 Editor
When a pedestrian comes to an intersection and presses the “walk” button, the pedestrian may feel frustrated that the button doesn’t seem to do anything. The pedestrian is correct. Usually, pressing the button accomplishes nothing, at least not at an intersection busy with vehicular traffic. Very early or very late in the day, when hardly anyone is around, pressing the button may interrupt the regular signal cycle. Some pedestrians know this and yet can’t resist pressing the button at all times of day. They can’t give up feeling in control. Most others aren’t aware of how the button works, or rather doesn’t work, and press it innocently expecting a favorable result. Depending on that person’s patience, or lack of it, they may feel pressing the button has some effect. Whatever the behavior of the person pressing the button, the button’s behavior doesn’t change.
Impatience is the modern disease. Oddly, some of the people exhibiting impatience by using their phone while walking or driving on busy city streets are impediments to other people who are in a hurry to get to their destination. Not waiting for a better moment to use their phone than being in traffic on the road, or walking on a crowded sidewalk, causes a phone user to slow down and speed up unpredictably and meander from side to side, acting not unlike a drunk. Such behavior is exasperating to others and dangerous for everyone, including the zombie phone user. The pedestrians hurrying past and around the zombie may not understand proper sidewalk etiquette themselves, often being brusque with people they feel are in their way, when sometimes those slower folks are only minding their own business at their own pace. The clashes can be especially testy at airports as people rush to make connecting flights or get through the security bottleneck. 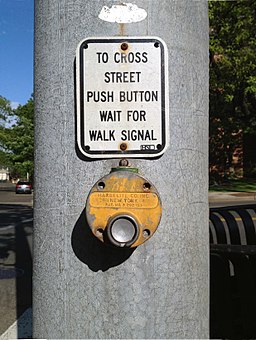 An example of the sturdy Harbelite pedestrian walk signal device in Tuckahoe, New York. Photo by SteveStrummer.
Stay to the right when standing or walking slowly, and keep the left side clear for those wanting to pass. Pedestrian etiquette on sidewalks, the moving type or otherwise, is the same as the rules for motorists on the road. Groups of people out for a walk should not clog the sidewalk from side to side, but travel in single or double file. Teenagers and young adults, particularly males, may not understand there is such an unspoken rule, though more likely they do understand it, and they enjoy playing chicken with other pedestrians and intimidating them. That’s another subject for another day. For most reasonable people who want to do the right thing, it’s enough to politely point out the error of their ways.

In this early scene from the 1980 parody film Airplane!, the announcements over an airport public address system go from maintaining order to getting emotional. Warning: foul language.
Realizing there are other people in the world and acting according to their interests as well as your own is a big step toward curing yourself of impatient behavior if that’s something you want to improve upon. People who act with impatience are often considering only their own interests, and some are incapable of seeing beyond that. So be it. They will always be impatient, forever cutting other people off in traffic, cutting in lines either in a car or in person, pushing everyone else out of the way on public transportation or elevators, stopping unexpectedly in the middle of a busy sidewalk to take a phone call or send a text message, and mashing the “walk” button multiple times at intersections, as if their imperious command should make any difference to a senseless button. On a particularly harried day, it would be tempting to give in and be like that yourself, even if behaving like an impatient jerk is not as satisfying a release as it might seem. Being aware and looking out for the other person is a good way to stay safe, besides being good manners.
― Ed.