A Corny Time of Year

October 27, 2017 Isidore Gnome
October is corn harvest time in much of the United States, and popcorn has this month dedicated to it in all its glory. The sweet corn harvest was earlier, in August and September, but for field corn and popcorn, October is typically the month when farmers cut the stalks. The Harvest Moon was on October 5th, and at the end of the month corn and corn stalks figure in Halloween decorations and celebrations. Corn will have a part in the celebrations of Thanksgiving and Christmas, too, though for Christmas its part will fall mostly to strings of popcorn for garlanding Christmas trees.
Popcorn is made from a special variety of maize, called Zea mays everta, the special popping characteristic of which Native Americans may have discovered long ago when some kernels fell near a cooking fire. It was a long time between that discovery and the one in the 1960s by Orville Redenbacher and his business partner, Charlie Bowman, of a hybrid strain that popped more reliably and twice as large as earlier popcorns. The “gourmet” description added to the packaging of their product was purely marketing. In the meantime, popcorn had become a favorite snack food in America by the early twentieth century and had even become ingrained in popular culture, with the merchandising of Cracker Jack caramel corn and peanuts in a box with a prize, and the baseball song “Take Me Out to the Ballgame”, which included a reference to Cracker Jack. 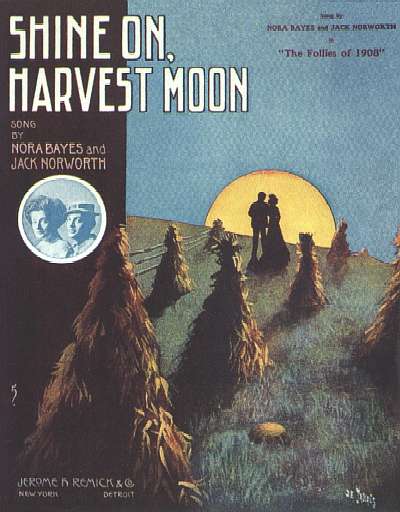 “Shine On, Harvest Moon” sheet music cover from 1908, with corn shocks included in the artwork. This songbook standard was written by Nora Bayes and Jack Norworth. Norworth also co-wrote “Take Me Out to the Ball Game” in the same year, with Albert Von Tilzer.
The biggest boost to popcorn sales came from movie theaters, even though theater owners initially resisted selling popcorn in house because of the low brow connotations of the snack. Popcorn was cheap, and movie theater owners in the first few decades of the twentieth century sought a slightly higher class clientele. That changed during the Great Depression when theater owners took concession sales away from independent vendors out on the sidewalk and brought the selling of high profit items like popcorn under their own wing in the lobby. It wouldn’t be far fetched to say that popcorn sales saved many a movie theater from bankruptcy during the darkest years of the Great Depression.
The next big boost to popcorn sales came in the 1980s with the simultaneous advent of home video rentals and the widespread appearance of microwave ovens in homes and, with them, microwaveable popcorn. Suddenly people could save money on a trip to the movie theater and still enjoy a facsimile of their favorite movie theater snack at home. There have been health concerns about both movie theater popcorn and microwaveable popcorn, each for different reasons. Lately there have also been alarms about the use of neonicotinoids, implicated in honey bee deaths and colony decline, as a seed coating for planted popcorn. The good news is that popcorn has not been swept up in the GMO madness. 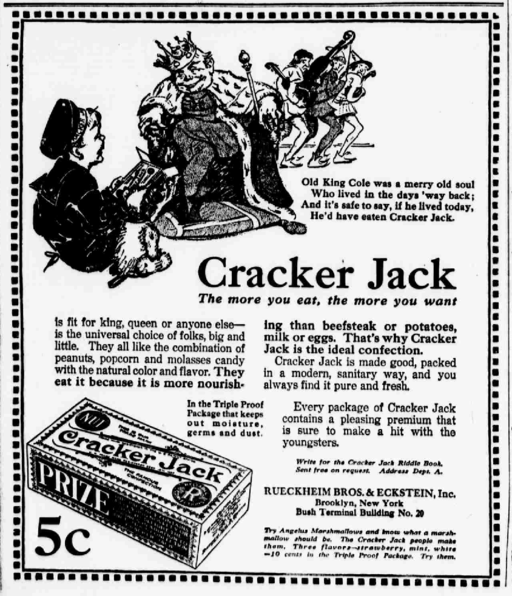 1916 newspaper advertisement for Cracker Jack.
The Swedish Chef grooves to the tune “Popcorn”. For an added treat, turn on the captions.

The best tasting popcorn and the healthiest might have been the batches people cooked up themselves on their stove tops at home in the days before they gave in to the tempting convenience of microwaveable popcorn. It’s still possible to make it that way, of course, and it is really not that difficult. The home cook also has the advantage of controlling the amount of butter and salt added, the two ingredients that turn popcorn from a relatively healthy snack into a not entirely healthy one. What makes the concept of home cooked popcorn even more attractive and plausible is the addition to the home entertainment system since the 1970s of video recorders and DVDs, all with associated remote controls featuring pause buttons. No more rushing to pop up a snack during a commercial break! Take some time to relax and do it right.
― Izzy