October 24, 2017 Techly DoRight
In a surprising development, Senators Amy Klobuchar (D-MN), Mark Warner (D-VA), and John McCain (R-AZ), recently introduced a bill, called the Honest Ads Act, that would impose the same types of regulations on internet political advertising that have long held sway over political ads in print, radio, and television. What’s surprising about it is why it took this long to regulate online political advertising, and that until now there hasn’t been regulation of the same sort as in other media. A reader of online news could be forgiven for having assumed that internet political ads were subject to regulations similar to what has existed in other media for decades, such as disclosure within the ad of who paid for it. Not so.

What took Congress this long? Congress has been behind the curve for years on technological developments, and so in this case the more relevant question is why are they acting now. The answer is presumed Russian interference in last year’s presidential election, and specifically the placement of advertisements as well as so-called news stories on social media sites that the Russians allegedly intended to influence the election results. All that has yet to be sorted out in ongoing investigations, but in the meantime it will be a positive development to have online political advertisers more openly accountable. 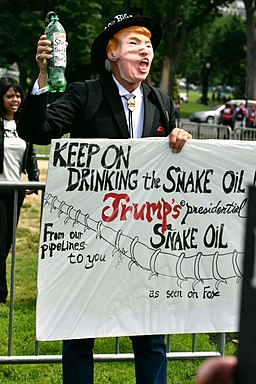 A demonstrator in a Trump mask at one of the March for Truth rallies that took place around the country on June 3, 2017. Photo by kellybdc.
Much has been made over the past year especially, because of the election, of the effect of “fake news” on the electorate, the majority of which now appears to get its news through social media feeds on sites such as Facebook and Twitter. Those sites have made noises about doing a better job monitoring the reliability of news sources, but ultimately they cannot effect a major reduction in fake news without entangling themselves in issues of censorship, and consequently losing user trust even beyond the drop in trust they experience when another fake news story makes the rounds.
Forty and more years ago, when there were three national television news outlets and one or more print, radio, and television news outlets in every middling city or larger throughout the country, all of them reliant on a few news service gatekeepers such as the Associated Press, United Press International, and Reuters, the daily news reached a consensus that most people plugged into. There were drawbacks to such centralization, of course, but in general there existed a set of generally agreed upon facts from which disputants could diverge.

Now the news has atomized to the point that someone with a large Facebook following can spread a story with no basis in fact, and those followers will spread the story some more. There are no editors sitting on the story until it is verified. The engineers at Facebook and Twitter are not interested in the job, nor do they seem to think it should be their job. Their job is to watch what their customers watch so that they can boost their company’s revenue by effectively targeting advertising based on those results.

It is as if a newspaper’s staff printed almost everything that came across their desks, with little or no editorial judgment on the contents, and focused most of their energies on the advertisements. A newspaper could not do that because of physical limitations on paper, ink, and space, but an online news feed has no such limitations. A reader can scroll on forever, if so inclined. It’s a buffet that the social media sites are serving up, and it’s in their interest to try to specifically please each person they serve, a task made possible by the interactive nature of the web, where each user click is tabulated as a vote in favor.

From the 1976 film The Pink Panther Strikes Again, Peter Sellers as Inspector Clouseau shows the foolishness of making assumptions based on limited information.

There’s only a limited amount then that the news feed providers can and should do to monitor the reliability of the content they provide. Every little bit helps, which is why it’s good news that Congress is belatedly getting around to at least subjecting political advertisements to regulations that would alert interested readers to the provenance of online political advertisements, therefore allowing the readers to judge for themselves the veracity of the ads.

Ultimately people who read news online from a multitude of sources have to exercise critical thinking more than ever before in evaluating the reliability of what they are reading. The days of passively accepting the news in predigested form from trusted sources are over, and that’s all for the good really, but it also means being on guard and skeptical more than ever, much as people want to indulge their lazy tendencies toward confirmation bias, or believing what they want to be true.
― Techly