For those who are paying attention, it’s hard these days to keep up with the news coming from the seat of the federal government in Washington, D.C.. It can seem the news really is erupting from the seat with flatulent, obscene noises. The news can also be disheartening, even maddening. Have we slipped into another reality, or just a darker version with comic undertones? The nuclear nightmare has re-emerged after having slipped away into the dreamworld for more than thirty years.

The fealty of the dead is not respected, while the call goes out to stand in blind loyalty to a starred and striped cloth, ignoring the crimes of the police. It makes no sense, is even insane by any clinical standard, but still the lies and hypocrisy mount one on another, like flies dying on a windowsill. No, those aren’t flies beating themselves silly against the windows, liberal media. Is the media liberal? It must be; we have repeated the lie often enough. There’s a trick some have mastered of refocusing their eyes through the smudged window to what lies outside, where the world is sunny and new. They don’t see the flies.

Where does the new viewpoint lead but to some very old ideas? Beatings, torture, and more war. It’s okay because it all happens in a place away from here, and because the people on the receiving end deserve it, otherwise why would we be doing it to them? Those people would do the same to us and worse, given half a chance. We must not give them that chance, not even a smidgen of it. We must interdict. We must do to others before they do to us. That is Law. To do otherwise is to appear weak, and to appear weak is to be nothing. Let the meek inherit the Earth in the next life, this one belongs to the vicious. 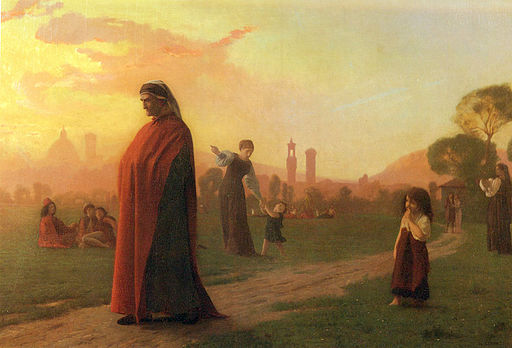 Dante (He Hath Seen Hell), an 1864 painting by Jean-Léon Gérôme (1824-1904).
There are people in the world who need destroying, no matter who they are. We know. God knows. God told us. Who are we? The ones who know what God knows, that’s who. One day we might look into our hearts as through a window, and see there only flies battering themselves to death against the glass rather than seeing through them to the green grass and blue skies outside, but that day will never come, God willing, because it’s been an awfully long time coming already and still the world goes on like it has for years, for ages, the rich getting richer, the lunatics insisting they should run things. Still, for all that, some wistful souls continue wanting to make things better by acknowledging there are flies buzzing the windowpanes, and they try opening the windows and shooing the flies back outside.
― Ed.