October 15, 2017 Techly DoRight
Online shopping increases as a percentage of overall retail buying year after year, with the current rate a little under ten percent. When people buy items online, they typically have them delivered to their home, and since regular hours for package delivery usually coincide with the hours most people are away at work, that opens an opportunity for package thieves, or “porch pirates”. As could be expected, boom times for online shopping and home delivery of packages has created an accompanying boom in porch piracy, which has victimized as many as 23 million people in the United States.
There are technological solutions available to combat the problem, though none are foolproof. One item employs a siren when a package is somehow removed from it, but on further reflection that may not be the best solution since there are a number of ways a package might get knocked off the item without the assistance of a thief, such as an inspection visit by a neighborhood pet. Having a siren going off unnecessarily like that is likely to make a homeowner unpopular in the neighborhood, and similarly to a car owner with an overly sensitive car alarm, that person’s property could be in for an egging. 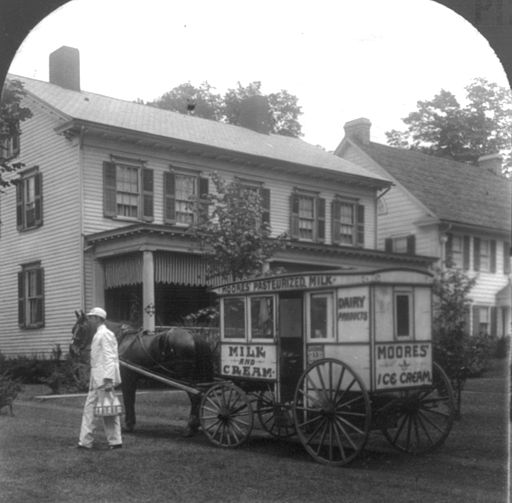 A Milkman makes his rounds in 1925. Did thieves pilfer milk from porches in the old days?
Cameras are a front porch security option, and to be effective the homeowner really does need more than one. Simply having a view of the thief is often not enough information for an eventual arrest; it is more helpful to have a view of the street as well in order to capture an image of the thief’s vehicle make and model, or even the license plate. In any event, it’s always a good idea to make thieves aware that they are under video surveillance, unfortunate as it may seem that innocent visitors are also being watched, in a kinder, gentler version of Big Brother. Little Brother?
Third party drop sites are becoming more prevalent in cities. For people in outlying suburbs or the countryside, those sites are generally not an option now because of the poor economics. As online shopping continues to grow, however, that may change to the point where it will not be unusual for people to pick up their packages at some secure location not far from their home, even in lightly populated areas. In a way, such a system would be a return to the days of picking up a package at the local general store. To be a viable option, the pickup location would have to offer more flexibility in services and hours than the local post office. 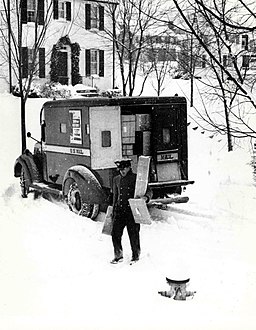 A United States Postal Service Parcel Post carrier delivering packages in the snow around Christmas, 1950. Photo from the Smithsonian Institution.
Apartment dwellers have few options for secure delivery of packages to their door because of limited space, but since almost all apartments are in town, they have better access to third party pickup sites, or even the building of the package delivery service. A delivery option that has been in the news lately involves giving the delivery service access to the recipient’s house or apartment. That appears to open a can of worms, and it would be surprising if the nightmare of liability pitfalls were ever worked out to everyone’s satisfaction.
A better idea that goes halfway is for the package recipient to install a lock box outside the home, sharing the pass code with the delivery service. For apartment dwellers, a lock box would probably have to be no bigger than breadbox. Homeowners could have a box as large as practicable for them, or could even use a shed, though again for liability reasons it would be a good idea not to store anything else in the shed. 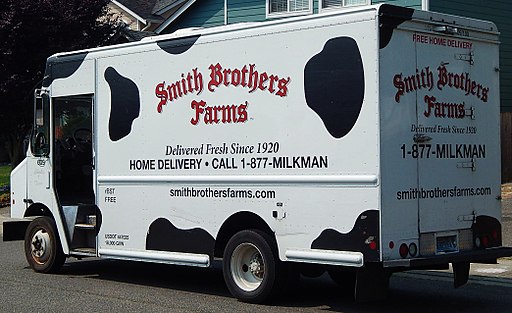 A milk delivery truck in Auburn, Washington in 2017. More uncommon these days than 60 or 70 years ago, home delivery of milk is nevertheless increasing, gaining in popularity along with other home deliveries. Photo by Ron Clausen.
Ultimately in order to put the skids on the current halcyon days for porch pirates, the onus for package security once delivered is going to fall to the recipient. Online shopping is only going to continue growing, and the consequent increase in home delivery will continue to present growing opportunities for thieves. Up until now, online stores and package delivery services have been accommodating toward customers who have reported stolen packages, offering replacements or refunds. That is likely to change if the trend in porch piracy continues upward unchecked, increasingly eating into firms’ bottom lines. The firms involved in online selling and the delivery of those goods have a vested interest in developing better safeguards than what is currently the widespread practice of relying on watchful neighbors. That was the old days, if it ever really was. More likely the problem now is nobody’s around during the day but the thieves, who are tempted by more and more easy pickings showing up on porches.
― Techly