The Chickens Have Come Home to Roost

October 13, 2017 Vita Historia
It’s hard not to notice the impact of the national security state in daily life, particularly for people who travel regularly or pay attention to news stories. Pat downs and x-rays at the airport, police road blocks with DNA swabs that are voluntary but are implied by the police to be mandatory, stop and frisk in minority neighborhoods, the shoot first and ask questions later garrison mentality of the police, SWAT team no-knock raids, and the nearly complete disregard by governmental authorities for citizens’ rights under Fourth Amendment protections against unreasonable or warrantless search and seizure operations.

It may be hard to believe it is the citizens of the republic who allowed their agents in government to accumulate all that oppressive authority. People like to think government has a natural tendency to creep into citizens’ lives and to aggrandize itself at their expense, and that is true. What people often fail to acknowledge, especially in a nominally democratic republic such as the United States, is their own complicity in allowing the government to get away with it.

Fear can cause people to do some foolish things, and one of  them is relinquishing unchecked authority to government following a catastrophe, such as what happened after the events of 9/11/2001 in the United States. Save us! Kill them! The tendency of people to allow themselves to be stampeded toward war has long been noted by manipulators in government, industry, and the press, who have used it to their advantage. There is a long history in America of cynical manipulations toward war, but perhaps the most blatantly obvious occurred at the start of the Spanish-American War shortly before the turn of the twentieth century.

The citizenry are usually stirred to support these wars by patriotic fervor and by some wildly exaggerated stories in the popular press of atrocities supposedly committed by the new enemy. Most people tend not to take time away from their busy lives to examine things more closely and rationally. Remember the Alamo! Until thirty or forty years ago, except for the large scale conflicts of the Civil War and the two World Wars, Americans could largely go about their daily lives without reference to the far away battlefronts their leaders had stirred them up to support initially.
In the 1941 film Citizen Kane, Orson Welles as Charles Foster Kane, a newspaper publisher at the time of the Spanish-American War, throws a party to celebrate his hiring of the staff from a rival newspaper. His colleagues, played by Joseph Cotten as Jedediah Leland and Everett Sloane as Mr. Bernstein, provide commentary on the proceedings.
Superficially, that still seems to be the situation at home, where Americans can go shopping, while far away the world burns. Look more closely, however, and it becomes obvious that the so-called “War on Terror” is different than any other past war in that to a hitherto unprecedented degree it has allowed government to infiltrate lives at home as well as abroad in the name of security. The reasoning is that there is no “front”, as in a conventional war; the front is everywhere, and government must therefore defend everywhere, from flying drones over the huts of Afghani opium farmers to using the NSA to monitor the communications of American citizens. 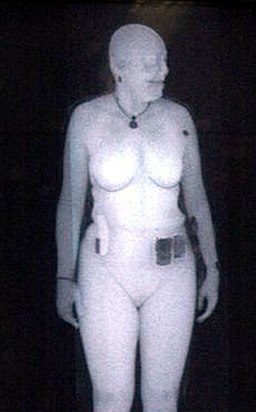 A 2007 image of Susan Hallowell, Director of the Transportation Security Administration’s research lab, taken with the backscatter x-ray system, in use for airport security passenger screening. This is not the image that screeners see at the airports. The machine that took this image does not have the privacy algorithm.
People line up for security checks at the airport, the majority of them probably unconcerned with the larger issues of government oppression and infringements on their liberty as long as they can get through with minimal hassle to themselves. But the hassles will only grow. Highway road blocks and intrusive police demands will only increase. The courts will continue upholding these practices and implicitly grant the authorities ever more leeway in pushing people around in the name of security. The way the American military occupiers treated the Filipinos in the early years of the twentieth century continues reverberating in unexpected ways, such as in how it informed our use of torture in the early twenty-first century; our treatment of various Latin American countries throughout the twentieth century haunts our relations there and here to this day; and at last the methods, materiel, and mindset of occupation we are deploying throughout the world today, and particularly in the Middle East, have come home to us, the fearful perpetrators of so much unnecessary violence. That’s Homeland Security.
― Vita