Proud of Their Ignorance

October 10, 2017 Editor
It is one thing to be ignorant, and quite another to be militantly, defiantly proud of that ignorance. To be clear, ignorance is not the same thing as stupidity. Ignorance can be rectified through education of one sort or another, while stupidity is almost always a life long condition. A person can be proud of their stupidity, which would be an unfortunate attitude but not something others could condemn that person for, given that a stupid person is apt to adhere to stupid beliefs. An otherwise reasonably intelligent person who persists in ignorance, on the other hand, exhibits a moral failing. 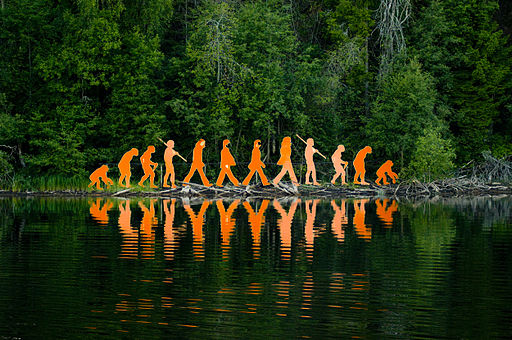 A cheeky take on the typical evolution of humans illustration, which in this instance has been altered by the inclusion of a parody of The Beatles’ Abbey Road album cover, indicating that may have been the climax of our evolution. Photo composite by Flickr user possan.
Since before the election of the Vulgarian-in-Chief, observers of the American political scene have marveled at how his supporters – believers, really – have stuck with him no matter what. As the Vulgarian himself noted fairly early in the campaign, “I could stand in the middle of 5th Avenue [in New York City] and shoot somebody and I wouldn’t lose voters.” Why is that? With all his lies, evidence of misogyny, racism, narcissism, greed, corruption, nepotism, and, since his election, his evident inability to govern competently, why do roughly one third of the American electorate stay on his side regardless of all that?
The best guess hearkens back to why those people voted for him in the first place. Throughout the campaign, his voters kept saying that he ‘tells it like it is” and “he’s his own man and not an establishment insider.” Neither of those core beliefs, nor many of the others his supporters expressed about him, were entirely true, but that made no difference to them. What made a difference to them was that the language he used appeared to make those things true, and they desperately wanted to believe. He had snake oil to cure them, and they were eager for his cure. Telling it like it is meant he was prepared to advocate politically incorrect positions in the culture wars, and being an establishment outsider had no more real traction than his complete lack of experience in organized politics.

On these slim assumptions they voted for him, because the assumptions became beliefs. Don’t confuse them with the facts. It was enough that their Chosen One appeared to give a middle finger to the politically correct and to the Washington establishment. Once he got into office, he continued displaying his middle finger, and whether or not that has had a salutory effect on his ability to govern effectively appears immaterial to his core supporters, who are more concerned with what they are against in the culture wars and in government.

A clip from the 1960s television situation comedy Hogan’s Heroes, featuring the German Sgt. Schultz, whose catch phrase was “I know nothing.”

In a cult of personality, what matters is the perception of the believers, rather than the reality. Any attempt to dissuade them from their delusions has the effect of making them more adamant. Nothing can be done for most of them, who see nothing wrong with themselves. Because it is in his nature to do so, there is no question that their preferred Strong Man will continue to exploit the opportunity they have afforded him, in a multitude of venal ways which will continue until the day he leaves office. One might as well expect the leopard to change its spots as expect him to evolve into a respectable and respected statesman. All that can be done is to resist and to continue bringing evil into the light, much as it often seems that only the choir hears the preaching. Today more than ever, the choir can amplify and magnify and sing out what they hear, and they too can tweet.
― Ed.