Once Upon a Time

October 8, 2017 Isidore Gnome
“When I was a child, I spake as a child, I understood as a child, I thought as a child: but when I became a man, I put away childish things.”
― 1 Corinthians 13:11; King James Version of The New Testament.

It’s fine to believe in fairy tales as a child, at least when the belief is harmless. Children learn about human behavior, often through the actions of animal characters, and they pick up some moral lessons. Fairy tales have their place in educating children, but that place is not in science textbooks. Recently the New Mexico Public Education Department injected a dose of the fanciful in editing science standards for the state’s schoolteachers to follow in their classrooms. 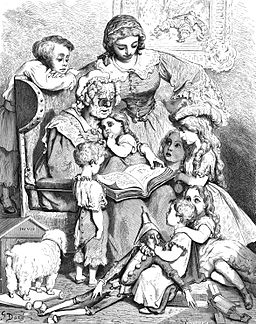 Mother Goose reading fairy tales in an illustration by Gustave Doré (1832-1883) for the frontispiece of an 1866 edition of Charles Perrault’s Stories or Fairy Tales from Past Times with Morals, or Mother Goose Tales.
The questionable edits dealt with the age of the Earth, evolution, and human-caused global warming. All the usually controversial subjects in the battle over teaching the nation’s youth. The standards that New Mexico’s top public school bureaucrats were altering came from the Next Generation Science Standards (NGSS), which were formulated by national science and teaching associations. Editing science teaching standards appears to be another case of cherry picking facts and replacing them either with fancy or with the assertion of widespread doubt where there really is very little, along the lines of what has been happening with textbooks for years now.
Texas has long been in the news for leading the way for creationists and climate change deniers in pressuring textbook publishers to muddy the scientific waters on those two subjects, and perhaps has served as an unfortunate model in that respect for other states like New Mexico and California. The playbook borrows from the scientific method in that it adopts skepticism as a tool for doubt, ignoring the part about overwhelming evidence eventually tipping the scales to the point where continued skepticism is no longer productive without the presentation of convincing countervailing evidence. Persisting in error to that degree becomes obstructionism, and while some of it is ideologically driven, it can often serve the ends of greedy corporations, such as in the fossil fuel industry.

From the 1975 film Monty Python and the Holy Grail, a scene where logic serves absurdity.

Teaching children falsely, either by substituting fanciful notions for facts or by omitting facts altogether, results in ignorant adults who are poorly prepared to manage real problems. Insisting children believe in fairy tales to the exclusion of understanding how the world really works will only reinforce the continued destruction of the environment and the misunderstanding of our place in it. Instructing children in dominion instead of husbandry replaces a clear-eyed view of what is and has been with what never was nor will ever be.
― Izzy