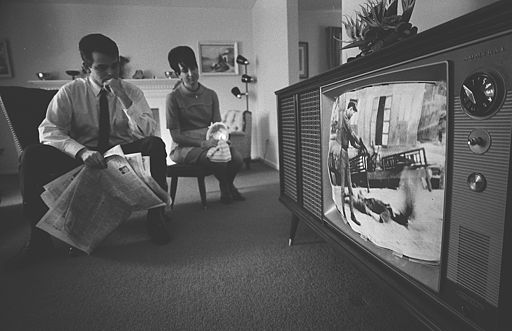 In the old days, a television viewer had to get up from a chair and cross the room to change the channel or turn the TV off in order to avoid unpleasant scenes such as this obviously taped-on picture of Vietnam War footage. Photo from the February 13, 1968 issue of U.S. News & World Report Magazine by Warren K. Leffler.
When the beginning of a National Football League game comes on the television then, and some of the players are kneeling during the National Anthem as a way of protesting police brutality and institutional injustice towards black people, and some people in the home audience are offended by the players’ exercise of their First Amendment rights, there is always the option of using the wonderful hand held device at their side and either turning the channel or turning the television off. For offended people in the stands at the game, the options are different of course, including turning away from the offending sight and riveting their attention on Old Glory, or taking the occasion to visit the food concourse or the restrooms. For our purposes, we will be concerned with the home viewers who vastly outnumber the people willing to put up with the rigmarole of attending an NFL game in person.
Let us suppose that the home viewer has discarded the options of turning the channel or turning the television off using their wonderful remote control, perhaps because the fate of the western world depends on their viewing of the game at hand, and so is left with the spectacle of highly paid professional athletes, many of them black, kneeling during the National Anthem. Never fear!

Firstly, remember that the protest itself is against the police and the judicial system, not the revered Anthem and the Flag, much as Supreme Leader would like to pervert the understanding of the protest to push white America’s jingoistic buttons. If, realizing this, the kneeling is still offensive, remember that the Constitution was written in large part to protect unpopular minority (meaning less than majority in this case, not necessarily differently skinned) expressions from the tyranny of the majority. Yes, it’s in the Constitution that they can do this! God bless America!

Secondly, remember to stand at home during the National Anthem and either salute or place one hand over your heart. Just because a football fan is at home viewing the game, that is no excuse for not showing due respect to Flag and Country during the National Anthem if that is what is so important to them that they are eager to publicly shame others for not doing the same. If you don’t have a flag displayed at home (and you really should), stand and face Washington, DC, or whatever direction indicates the position on the globe of Supreme Leader at the moment. He could be in South Korea just across the line from North Korea, childishly taunting his rival in idiocy, Kim Jong-un!

The Heitech Universal Remote, one of many wonderful devices available on the open market which, with sage usage by the discerning consumer of entertainment, should shield that consumer from offensive content such as the free exercise of Constitutional rights by black athletes. Photo by Raimond Spekking.
Lastly, remember to take pictures of yourself standing at home for the National Anthem and pass them around for the scrutiny of your friends, neighbors, family, and co-workers. You must pass muster! What use is your sunshine patriotism if no one else notices it? It’s all well and good to be in the stands at the game and boo the kneeling players and berate your fellow citizens who side with them, but for the stay at home football fan there has to be a more influential option than firing off angry emails to the league and the local paper. Take pictures and post them on your social media accounts. Burn your NFL merchandise in the front yard. Lynch Colin Kaepernick in effigy – oh, wait, that’s a little too Ku Klux Klan for the suburbs. Too many echoes.

Jack Lemmon and Peter Falk in 1965’s The Great Race understood the importance of pushing buttons on mechanical devices to achieve desired results, though their efforts didn’t always work out as planned.

You get the idea. There’s one technological hurdle that the wonderful remote control device can’t overcome, and that’s answering the question “Why?” Why, for instance, do grown men (and some women) get so emotionally invested in a game that they have blown a simple political protest out of proportion and selfishly, narcissistically claimed it has ruined their fun? Why is it no one refutes the silly argument about “pampered millionaire athletes”, when after all it was all of us who made them rich, with our misplaced priorities that reward hundreds of jocks with millions of dollars while thousands of talented schoolteachers and others who provide vital services scratch to make a living? Who are we then, after elevating them, to tell these athletes to shut up and play, and why do we think it’s important that they should? Why do the rest of us allow the childishly insecure and testosterone poisoned among us to set the agenda and bully everyone else to follow their foolish commands? Too bad we can’t point a remote control at ourselves for the answers. Meanwhile, if the protests bother you so much that you get your knickers in a twist about them, push a button on your remote control and read a book instead.
― Techly