All We Got Are Thoughts and Prayers

October 3, 2017 Vita Historia
Thoughts and prayers, thoughts and prayers, all we got are thoughts and prayers. After the latest mass killing in America, add “warmest condolences” from Supreme Leader, friend of the National Rifle Association (NRA) and hinter at how Gun Nuts could hide behind the Second Amendment to the Constitution in order to take out his political rival in the 2016 presidential election. Nothing will be done to stop the killing. This is who we are, what we have become, a sick society.

A scene from director Stanley Kubrick’s 1987 film Full Metal Jacket with a cool, aloof discussion of two of America’s many killers, at least until the end, when one of the recruits appears to be personally affected.

Gun company stocks are up again in the last two days, after slumping since Big Cheeto took office in January. Obama was great for gun sales, because his presence in the Oval Office fed the paranoia of the Gun Nuts, despite the real power to control their activities with gun control legislation residing with Congress, which has been bought many times over by NRA lobbying. The crazy black man is coming for our guns! But of course they would use a much less genteel appellation. 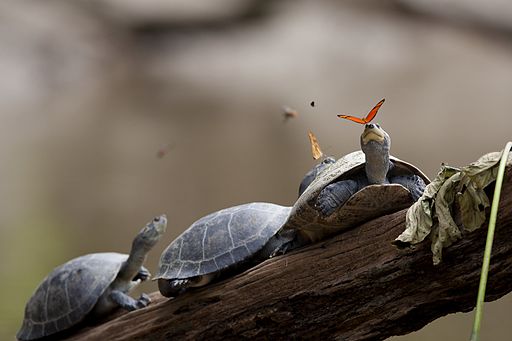 Two Julia butterflies, Dryas iulia, drinking the tears of turtles, Podocnemis expansa,in Ecuador. Turtles bask on a log as the butterflies sip from their eyes. This “tear-feeding” is a phenomenon known as lachryphagy. Photo by amalavida.tv.

Big Cheeto was bad for business because the Gun Nuts believed he wasn’t about to come for their guns, but now with the latest mass killing there’s still the libruls and their Democratic allies in Congress to worry about. Better stock up! What Would John Wayne Do (WWJWD)? You better believe it. Shoot first, ask questions later, especially when confronted by one of them people, the kind who don’t stand up for the National Anthem. Amurica, love it or leave it, Commie. How did we come this far, only to fall back into the past? We never did advance as far as we supposed, only some of us did, and the rest, now with the backing of Orange Julius, are reacting against those advances – a word with a view they do not share – with massive retaliation. Making America Great Again, with warmest condolences.
― Vita