Old Before Their Time

September 8, 2017 Techly DoRight
The newest model of Apple’s iPhone is due out this month, and for people with deep pockets, or for those who absolutely have to have the latest and greatest from Apple, that’s good news. No doubt it will be an excellent product. But will it be worth the high price tag of $1,000 for a device that will be useful only two or three years before the user discards it? Apple’s smartphones have always been high priced, and they haven’t had any trouble selling them. Apparently enough people think iPhones are worth the high price to keep Apple churning out new models. 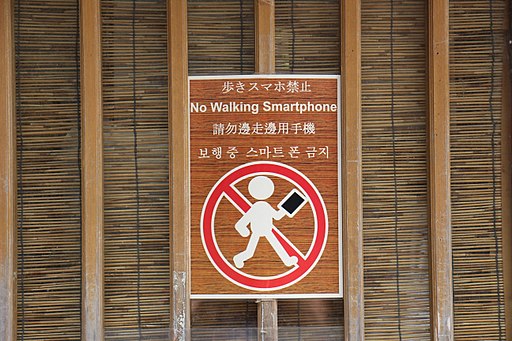 “No Walking Smartphone” sign in Okinawa, Japan. Photo by Connie Ma.
And churn is what it’s all about for the phone manufacturers, who want consumers buying the newest model to replace models that are only one, two, or three years old. It’s not all planned obsolescence, a sneaky plot by the manufacturers, because some of the churn is driven by the pace of changing technology and by consumer’s desire to have the latest and greatest. There are things phone makers have done, however, to make an older model phone prematurely less useful, such as creating barriers to repair by independently operating technicians. So much of the hardware is proprietary and locked down in one way or another by the manufacturer, with parts and service available only from their own very expensive shops, that consumers usually come to the conclusion they might as well buy a new model.
The situation in the electronics industry regarding independent versus factory authorized repair shops is comparable to an automotive repair scene where nearly the only option available to the consumer is the auto dealership because independents have been nearly frozen out by the manufacturer’s practices. The difference is that, unlike with cars, which cost $10,000 or more, many consumers seem to feel that electronics, the prices for which are generally below $1,000, are items better replaced than repaired, considering how the manufacturers have rigged the economics. Smartphone manufacturers in particular have widened and exploited this chink in the market.

Laptop and desktop computers are also sophisticated electronic devices, yet consumers don’t generally feel the need to replace them every two years. They are also more easily repaired or modified by independent agents or by the consumer, by adding higher capacity Random Access Memory (RAM) modules, for instance. The software lasts longer, too, with some users still relying on ten or fifteen year old operating systems, though that can be a dubious proposition for some less technologically savvy users who don’t know how to keep their software’s security up to date. None of these attributes appear to apply to smartphones, even though the frugal consumer will note that higher end smartphones fall in the same price range as the average laptop or desktop computer.

Smartphones by their nature have a small form factor, and that can make it difficult for manufacturers to pack every consumer’s every desire into each new model, at least until technology progresses further. It’s hard to believe, for instance, that between a smartphone’s internal data storage and a fingernail sized card that a user can load into the device, the data storage capacity of smartphones is now in the hundreds of gigabytes, up from several dozen just a few years ago. The computing capacity of these handheld devices now surpasses that of the average laptop or desktop computers available to home users at the beginning of this century. There’s little question then that, dollar for dollar, smartphones are a good value when comparing their computing power and usefulness with laptops and desktops. 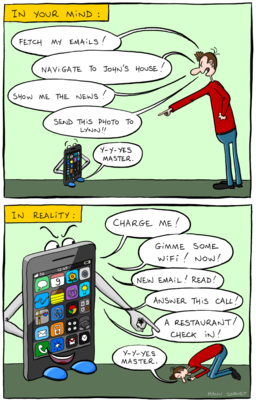 Mobile Relationship, a 2012 cartoon by Manu Cornet.
What is in question is why a smartphone should give a consumer only two or three years of use before needing replacement. That’s an expensive proposition for people who are struggling to meet the mortgage payments on a modest house. Do those people need iPhones instead of other phones that cost two or three hundred dollars? Of course not, especially since some of the high price of Apple products is driven by fashion, not usefulness. Now that many of the telecommunication carriers have adopted up front or installment payments for their phones instead of rolling the price into a monthly plan on a two year contract, effectively hiding the price as far as the consumer was concerned, maybe the question of why that consumer can expect less than half the useful life from a smartphone than from their home computer will come up more often, and if the question is asked by enough buyers, especially if they withhold some of their dollars by skipping this year’s model, then maybe the phone manufacturers will amend some of their questionable practices.
― Techly