There Oughta Be a Law*

The right of the people to be secure in their persons, houses, papers, and effects, against unreasonable searches and seizures, shall not be violated, and no Warrants shall issue, but upon probable cause, supported by Oath or affirmation, and particularly describing the place to be searched, and the persons or things to be seized.

Salt Lake City Police Detective Jeff Payne may not know the law, but on July 26 at the University of Utah Hospital he was determined to do the bidding of his watch commander, Lieutenant James Tracy, who also does not know the law (making his order illegal), to draw a blood sample from the unconscious victim of a two vehicle crash so that police could determine whether he was impaired by drugs or alcohol at the time of the crash. Payne and Tracy were prevented from violating the constitutional rights of patient William Gray by Head Nurse Alex Wubbels, who informed them that it was against hospital policy, which follows the law, to allow police to draw blood from a patient without the patient’s consent, or without a warrant or the patient being under arrest. Ms. Wubbels’s line of legal reasoning did not set well with Mr. Payne, who grew frustrated with not getting his way and finally gave in to the temptation to abuse his authority by arresting the nurse, roughly slapping handcuffs on her, and frog marching her out to his squad car. 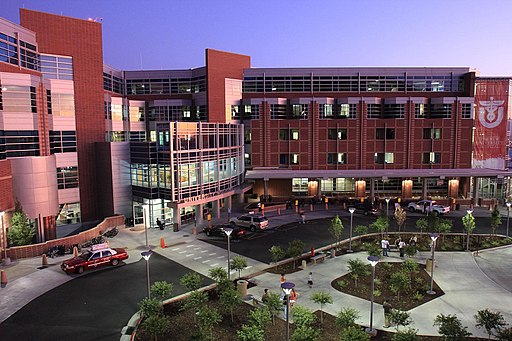 University of Utah Hospital in 2009. Photo by University of Utah Health Care.
Nurse Wubbels had to sit in the squad car for twenty minutes while police and hospital administrators sorted everything out, and then the cops let her go free. Ms. Wubbels held a press conference on August 31 with her lawyer, Karra Porter, where she showed portions of the police body camera videos from the July incident. The Salt Lake City police department placed Mr. Payne and another officer, probably Mr. Tracy, though they wouldn’t say, on paid administrative leave the following day. A paid vacation for behaving badly, usual police department internal procedure. Apparently the department hadn’t sought to discipline Mr. Payne at all before August 31, beyond temporarily taking him off the blood draw unit. If Wubbels and Porter hadn’t held their press conference and released the body cam videos, the police department and Payne and Tracy would most likely have gone about business as usual in short order. Now, because of all the stir this incident has belatedly created, they’ll have to wait a little longer. Ms. Wubbels has not yet pressed charges for assault and unlawful arrest.
Detective Payne apparently was claiming the right to draw blood without a warrant from the unconscious Mr. Gray under implied consent law, a police procedure which had been disallowed in Utah since 2007, and primarily used by police to gather evidence in drunk driving cases. Additionally, the Supreme Court of the United States in 2016 rolled back the part of implied consent relating to blood samples as too invasive. Police can still take breathalyzer samples without express consent. Payne and Tracy were either unaware of the change in the law or were so accustomed to rolling over hospital staff that the situation of a nurse challenging their authority had never presented itself to them before. In either case, the cops were in the wrong, making Detective Payne’s reaction even more outrageous.

A scene from the early 1960s television series Car 54, Where Are You? The dim witted Officer Gunther Toody, played by Joe E. Ross, is unimpressed by the discussion of high culture between his partner, Officer Francis Muldoon, played by Fred Gwynne, and the ride along cop in the back seat.

As a case of police brutality and abuse of authority this is small potatoes compared to what police perpetrate elsewhere around the country every day and without accountability. What makes this case notable is firstly the video evidence from the cops themselves, and secondly how the obtuseness of Mr. Payne leads him to escalate to violence what should have been a simple administrative procedure. Would it be too far fetched to ask that law enforcement officers know and understand the law? Is it too much to ask that they behave with adult restraint when they don’t always get their way? Who will ultimately pay the price for Mr. Payne’s ignorance and unwarranted belligerence other than the citizens and taxpayers of Salt Lake City?

Most likely he won’t have to pay a price, considering the way police are not held personally accountable. He may even get away with pleading ignorance of the law, an excuse the Supreme Court has recently ruled can be valid for police, even though anyone else who claimed ignorance would get laughed out of court. That’s why cops like Mr. Payne behave the way they do, because at the back of their minds they know they will get away with it. His accomplice in ignorance, Lieutenant Tracy, has a bachelor’s degree in criminal justice from Columbia College of Missouri, and he is currently studying to earn a master’s degree in the same subject from the same school. Payne himself attended college at Weber State University in Ogden, Utah, where he became certified as an emergency medical technician. Maybe these schools are diploma mills, or maybe Payne and Tracy are uneducable beyond passing tests necessary to jump career hoops.

Near the end of the 1939 film The Wizard of Oz, Frank Morgan as The Wizard grants a diploma to The Scarecrow, played by Ray Bolger, while the other members of the adventure look on. Despite his newfound brainpower, The Scarecrow still recites a famous mathematics theorem incorrectly.

Or they could just be stupid. Mr. Payne also works as an emergency medical technician for Gold Cross Ambulance. In one part of the video from Mr. Payne’s body cam, he is chatting amicably with other officers, apparently unconcerned over how his bullying has made Ms. Wubbels distraught as she sits in the police cruiser several feet away, and he remarks “I wonder how this will affect my Gold Cross job. I bring patients here.” And another officer says “Yeah, I don’t think they’re [who? the hospital staff? Gold Cross? probably both] going to be very happy with it.” Mr. Payne then declares “I’ll bring them all the transients and take good patients elsewhere.” There’s a 2012 nonfiction book by the philosopher Aaron James that Mr. Payne could read in order to further his studies and perhaps gain some insights into himself, and it’s called Assholes: A Theory.
― Ed.