Moles and Voles and Shrews – Oh, My!

September 1, 2017 Isidore Gnome
It can be upsetting for a gardener or homeowner to see mounds of turned soil and sinuously trailing lumps in a lawn that has taken a lot of human care and maintenance over a long, hot summer. Tunneling moles! It can be hard to realize that the little critters, which in the eastern United States most likely go by the name Scalopus aquaticus, are in fact paying you a compliment by visiting your yard to partake of your tasty vittles. You apparently have grubs and earthworms in abundance, signs of a healthy lawn ecosystem, and the moles have appeared to take advantage of the situation.
When moles eat earthworms, they may not be doing you such a great favor since earthworms enhance soil fertility, but they definitely help out by eating the grubs which would otherwise be munching on the roots of your carefully tended grass. There is collateral damage certainly, such as some brown patches in the lawn where the moles have damaged grass roots in their zealous search for grubs, and also the unsightliness to human eyes of the lumps they raise in the lawn because of their tunneling. Rest easy, because the tunnels aerate the soil and will settle back in time. 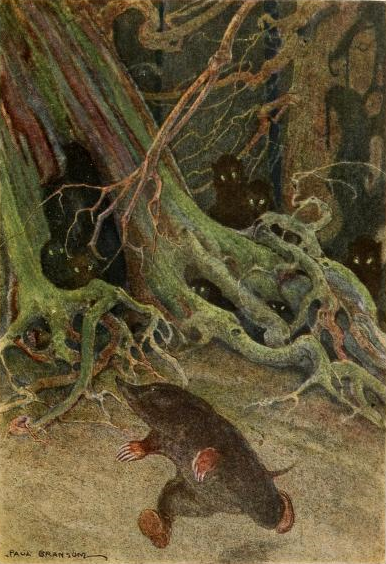 In Chapter 3 of The Wind in the Willows by Kenneth Grahame, called “The Wild Wood”, timid Mole ventures out on his own into the woods and has a scary time. Illustration from the 1913 edition by Paul Bransom. 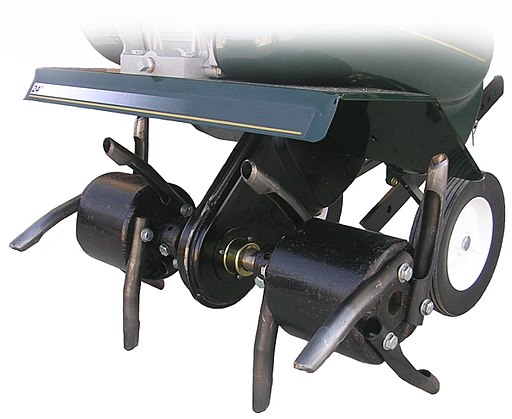 Lawn aerator attachment on a garden tiller. Photo by Lovesgreenlawn. Moles happily do the same work at no charge.
People attribute a lot of the damage they see in their plants and bulbs to moles, but really the damage is mostly the work of voles and shrews. Most moles are mostly insectivorous: they usually don’t eat plants. Voles and shrews, on the other hand, will eat just about anything given the chance, though they largely stick to a vegetarian diet. Voles and shrews will also take advantage of the tunnels that moles industriously create. This can make little difference to a gardener who notices a tunnel leading to a freshly planted tulip bed. Arguing before the court of that gardener’s censorious gaze that a mole excavated the tunnel in innocent pursuit of grubs, but it was the voles and shrews who exploited its proximity to the tulip beds to pad their own provisions, often makes no headway with the gardener, who declares war on the oblivious mole.
Traps, poisons, and medieval implements of execution are all pointless and expensive wastes of time and money. You have what moles want, and if after much effort and expense you manage to remove your nemesis from the premises, another will come along shortly to take his or her place. Taking away what the moles want, which means negating the naturally derived soil fertility that earthworms and grubs dig, would involve essentially turning your lawn into the soulless desert waste of a golf course. Green above by virtue of chemicals, but below, in the soil, the home of practically no creatures.

Judy Garland as Dorothy Gale, Jack Haley as The Tin Man, Ray Bolger as The Scarecrow, Bert Lahr as The Cowardly Lion, and Terry the dog, as Toto, in the 1939 film The Wizard of Oz.

Let the moles be, and thank them for their service. Watch out for the voles and shrews, however, and do what you can to mitigate the damage they cause. Get a cat, if that is suitable for you and the cat, and the neighborhood you both live in. Meanwhile, keep mulch and, if possible, snow away from tree trunks, because that denies cover to those creatures while they gnaw at the bark. Clean up leaf litter and brush piles where it seems sensible that these are nesting places and cover for runways. Most of all, let the grass grow to 3 or 4 inches, which should keep the lawn healthier overall, and make those lumps in the lawn less noticeable and not worth fretting about.
― Izzy