Mnuchin in Love Nest with “Actress”

August 25, 2017 Editor
Treasury Secretary Steven Mnuchin and his new bride, “actress” Louise Linton are the very latest models of a Washington power couple. The two gaga lovers tied the knot in June in a ceremony attended by Washington, Wall Street, and Hollywood elite. You were not invited. Mr. Mnuchin, fresh off his stint foreclosing on old ladies for his company, OneWest bank, was sworn in to his new gig as Treasury Secretary in February in an exclusive Oval Office ceremony attended by only a select few. Ms. Linton was there, because even though she and Steve hadn’t gotten hitched yet, she was still his very significant other. 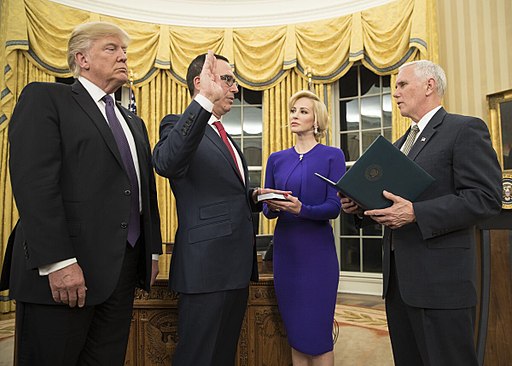 Steve Mnuchin swearing in, with P. and V.P. in attendance, and the fabulous Louise Linton looking on soulfully. Now that’s acting! Wish you could’ve been there – not!

The two lovebirds have been caught up in controversy lately – oh, that liberal media! – which really amounts to nothing to people who know what’s really important, like shopping! First, the Mnuchster had to fend off a plea from his Yale (only the best schools) classmates asking him to consider resigning from his post in the administration due to some unfortunate remarks made by his boss – again, it’s the liberal media stirring up trouble! No way, he replied, I’m in this for the long haul and there’s plenty of draconian fiscal measures I have yet to implement with the boss’s blessing. Besides, all that brouhaha was stirred up by the liberal media mischaracterizing the words which spilled out of El Supremo’s mouth. The words (only the best words) would seem to indicate he is a white supremacist and a neo-Nazi sympathizer, but that’s only if you slant things by listening to the words in the order he said them.

Shortly after that kerfuffle, the newly minted Mrs. Mnuchin, “actress” Louise Linton wrote some things on Instagram that the plebeians expressed indignation about, and Louise had to set them straight. To paraphrase, she told them to eat Little Debbie snack cakes, or whatever horrid stuff you working class dullards stuff in your mouths with your pudgy fingers. Louise and her figure are too fabulous to touch that kind of ick! Anyway, it all started with a plane trip to Fort Knox in Kentucky that Louise and hubby made – coincidentally! – on Monday, the day of the solar eclipse, in a place where the eclipse was near total. Fabulous! but a total coincidence, mind you! So there was a government plane involved, the shopping and eclipse viewing were fantastic! Eat your Little Debbie fudge fingers, or whatever they’re called, and shut up!

The talented and charming Eva Gabor sings the praises of luxury while Eddie Albert sings of integrity and honest toil. It’s not so much that they were giants in those days of the late 1960s, as that we have sunk to the bottom of the barrel since then.

That’s the news from the upper crust, your fabulous betters. You may return to your hog slopping or whatever it is you do, you pathetic prole. And pay up on that mortgage, slacker! Now go away.
― Ed.