The Name of the Game

August 1, 2017 Techly DoRight
Board games don’t require the high technology of video games, but they are enjoying a resurgence in popularity nonetheless, and in many respects they are opposite in nature to video game culture. Playing a board game is a social activity for two or more people, usually in the same room. While there are electronic ways to play board games remotely, such as chess via email, most people still play the games face to face. Board games can be violent in the players’ imaginations only, and game graphics are usually reserved. Like all games, however, they lean toward competitiveness over cooperation, with some board games promoting a winner-take-all outcome.

Monopoly has been such a game, popular since the 1930s when Parker Brothers introduced it. Or at least that was the story until the 1980s, when it became clear that the game was older, and that Parker Brothers had not been first with it. Elizabeth Magie patented the game in 1904 (renewing it in 1924), with two sets of rules, both meant as teaching tools to demonstrate the value of cooperation over unfettered capitalism. She called her game The Landlord’s Game, and under one set of rules, called “Prosperity”, land was taxed and the goal of the game was to make sure the player lowest in resources eventually doubled them, in which case every player won. The other set of rules, called “Monopolist”, contained the elements of the game as we know it today.

Ms. Magie did not mass market her game, with the result that homemade variants popped up over the years, mainly in the parlors of educators at Eastern colleges, who enjoyed the game more or less for its instructional value, as Ms. Magie had intended. She made no money from it. In 1932, Charles Darrow started marketing the game as his own after dropping the “Prosperity” set of rules and changing the name to Monopoly. It is unclear how much he knew about the game’s true origin. He sold the rights to Parker Brothers in 1935, and it was Parker Brothers that, after hearing rumors about Mr. Darrow not inventing the game, investigated and found Elizabeth Magie to sign a deal with her. Parker Brothers made and sold Ms. Magie’s The Landlord’s Game, with her original sets of rules, but it apparently didn’t sell well and soon faded into obscurity. 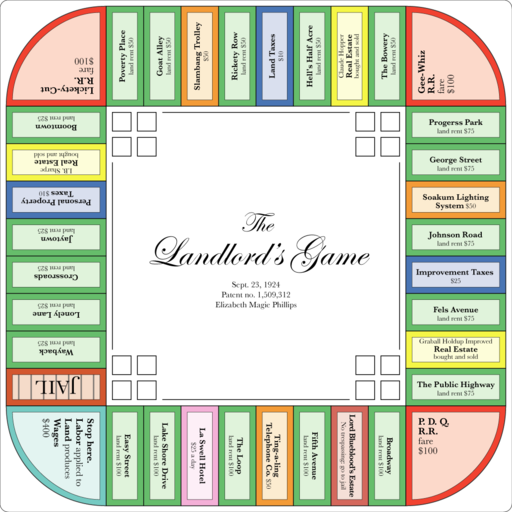 The Landlord’s Game board, based on Elizabeth Magie Phillip’s 1924 patent; image by Lucius Kwok.
Meanwhile, Parker Brothers continued promoting Charles Darrow as the inventor of the game Monopoly, and that game sold quite well. All games teach lessons, whether overtly as in Ms. Magie’s Landlord’s Game, or in a way most of us take for granted, as in Mr. Darrow’s Monopoly. We take for granted that people are competitive to a fault and that capitalism serves the seemingly inherent nature of people to take all they can, and if their riches come at the expense of others, then so be it. We take it for granted, but it is not entirely true. Human nature as represented in the lessons of the game Monopoly is an aberration. Why then has it become such an immensely popular board game? Why isn’t The Landlord’s Game, with its depiction of a more equitable world, just as popular?

Perhaps the thing about games is they are just that – games. They allow for a certain amount of role playing, of more or less behaving in a way a person would not behave in everyday life. Some games, video games in particular, take that release too far, or rather the players do. There are cooperative board games available, and they are becoming more popular, but they will most likely never equal in popularity their competitive cousins. There are other games, such as Anti-Monopoly, that try to redress the twisted lessons of Monopoly. The game Class Struggle goes even further. Will they ever become more popular than Monopoly, or even come close? Probably not. It’s good for players to stretch out in their games, however, and learn other lessons and other ways of being, and not end up with a one dimensional, selfish view of the world, a view that glorifies some others who probably shouldn’t be glorified, the ones who call themselves “winners”, though they take everything and leave nothing for anyone else, just like at the end of Monopoly.
― Techly