At a hearing last week of the space subcommittee of the House Science Committee, Representative Dana Rohrabacher (R-CA) asked NASA scientists if it was possible there was a civilization on Mars thousands of years ago. Kenneth Farley, a professor of geochemistry at the California Institute of Technology, answered there was no evidence of a civilization. Representative Rohrabacher could have been referring to the story on the Alex Jones InfoWars website last month about a slave colony on Mars, or he could have been referring to stories dating back to the 1970s about the “Face on Mars”, one of the supposedly artificial constructs among others in the Cydonia region of Mars. In any event, no one but Mr. Rohrabacher knows for sure. 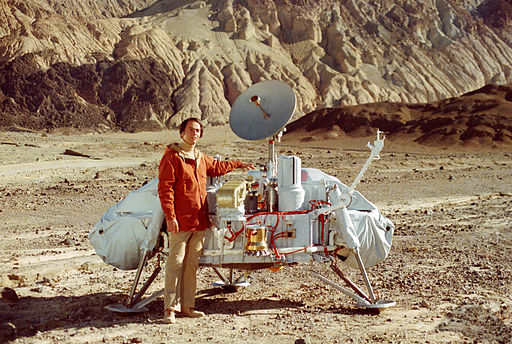 Carl Sagan with a model of the Viking lander in Death Valley, California. Sagan (1934-1996) devoted the fifth episode, called “Blues for a Red Planet”, of his thirteen part 1980 PBS documentary Cosmos to Mars and the possibility of extra-terrestrial life.
Both of the above mentioned stories are what people generally call conspiracy theories. Mr. Jones in particular is almost always referred to by mainstream media as a conspiracy theorist. They use the term pejoratively, as a smear, and in Mr. Jones’s case they are probably within bounds for doing so, though the haughty contempt attached to their use of the phrase also serves to dismiss people whose objections to the standard media or government line on any story are offered with more substantial evidence and sounder reasoning. To call someone a conspiracy theorist is to lump that person in with Mr. Jones and his far out contemporaries.
The public must use critical thinking in evaluating conspiracy theories, the conspiracy theorists who propound those theories, and their critics who attack them. Unfortunately, critical thinking appears to be in short supply lately. Many fake news stories gain traction among the gullible in the online echo chambers where people go to read opinions and conspiracy theories they want to believe. It’s all fun and games until a half wit with an assault rifle decides to take matters into his own hands, as happened with the Pizzagate conspiracy theory circulating online last year.
It’s unrealistic, silly, and unconstitutional to try to shut down the websites peddling the most egregious conspiracy theories. Education in critical thinking is the only way to combat the spread of lies, but there will always be people immune to learning. All that can be done in their cases is to limit the damage they can cause. Conspiracy theorists do serve a positive purpose, however, in poking holes in an official story. Rulers and their mouthpieces in the corporate media have an interest in constructing stories for the public to cover up their crimes or unethical behavior. Critical thinking by the conspiracy theorists and those willing to hear them out serves an important watchdog role in such instances. Just because the government of a supposedly democratic republic such as the United States tells a story about something does not mean that story is entirely, or even partially, true, and to dismiss critics of the government’s story as conspiracy theorists becomes a cynical method for shutting down debate. 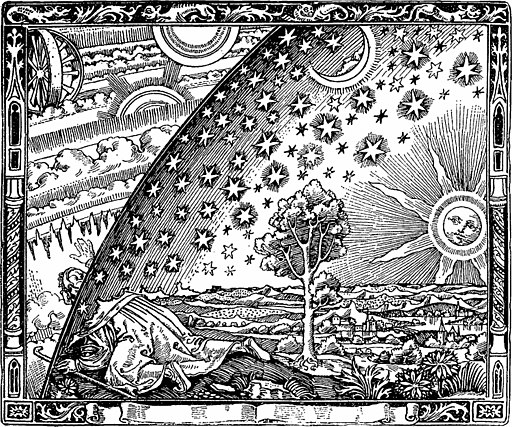 A wood engraving by an unknown artist that first appeared in Camille Flammarion’s L’atmosphère: météorologie populaire in 1888. The image depicts a man crawling under the edge of the sky, depicted as if it were a solid hemisphere, to look at the mysterious firmament beyond. The caption underneath the engraving (not shown here) translates to “A medieval missionary tells that he has found the point where heaven and Earth meet…”
A scene near the end of Oliver Stone’s 1991 film JFK, with Kevin Costner as New Orleans District Attorney Jim Garrison being filled in on a theory of the assassination by government insider, Mr. X (modeled on Fletcher Prouty), played by Donald Sutherland. The film was successful and was praised by critics, but major media and government figures labeled Stone a conspiracy theorist and took him to task for telling a story antithetical to the “Lone Gunman” findings of the Warren Commission.

There very well could have been a civilization on Mars long ago, though scientists contend it is unlikely. After all, we are still discovering – or rediscovering – ancient civilizations here in our own backyard on Earth. A present day day slave colony on Mars is even more unlikely, to the point of being improbable. Scientists do hypothesize that life, in the form of microbes at least, may once have been present on Mars billions of years ago, before it lost most of its atmosphere and it’s liquid water either evaporated off into space or turned into ice locked within rocks. Some of that microbial life, according to the theory of panspermia, may have seeded itself on Earth long ago when meteorite impacts were more common in the solar system, and rocks flung into space from impacts on Mars found their way to Earth. In that sense, it’s possible we are all descended from Martian life. The scientific consensus, however, is that life originated on Earth, and if there is any cosmic seeding going on, then our planet is the one doing it. In the universe as we understand it, anything is possible, but in critically thinking about agreed upon facts known as evidence, we come to realize that some things are more likely than others, and are even probable. In the most critical view, nothing is certain.
― Techly