July 21, 2017 Vita Historia
White House Press Secretary Sean Spicer resigned this week, originally stating his intent to stay on until August. Apparently new White House Communications Director Anthony Scaramucci decided August was too long to wait for Spicer to leave and, as Spicer’s immediate boss, took the opportunity to name Spicer’s deputy, Sarah Huckabee Sanders, the new press secretary, effective immediately. Mr. Spicer will most likely not be missed by anyone either inside the administration or in the press corps, though the satirists on the Saturday Night Live television show may miss him. They still have plenty of targets for satire in the current administration, starting with the Man with a Daily Message himself, the Tweeter-in-Chief.
The current administration has made no secret of its disdain for most of the press corps, certain favorites excluded, and may try to end daily briefings of White House reporters. It seems the briefings have been a White House ritual for so long that there was never a time they were not part of the scene. That is not the case. They are a fairly recent phenomenon in American history, and were not recognizable in their present form until the Eisenhower Administration. Even then the briefings were not conducted daily. It wasn’t until Dwight Eisenhower’s vice president, Richard Nixon, was elected president at the end of the 1960s that press briefings became a daily occurrence. Nixon also had the Press Briefing Room moved to its current location in the West Wing when he ordered the indoor swimming pool covered over and converted to that purpose. 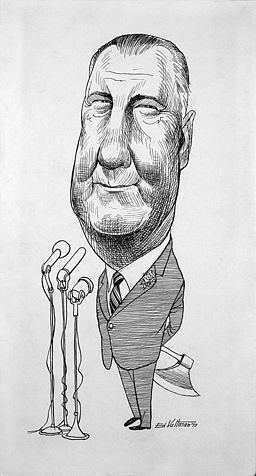 A 1970 caricature by Edmund S. Valtman of Vice President Spiro T. Agnew, who was widely recognized as President Nixon’s “hatchet man” in dealing with the press.
Strange that President Nixon should have been the one to increase the frequency of press briefings, considering his often contentious relationship with the Fourth Estate. Nixon was not alone among presidents in feeling vilified by the press, and vilifying the press in turn. Most presidents have kept the press at arm’s length at best, viewing them as a necessary evil and trying when they could to control the tone and substance of their reporting about the administration. “Spin control” has always been a concern of presidents and their aides, though that particular phrase for it didn’t catch on until the Reagan Administration.

A scene from the 1983 film The Right Stuff, directed by Philip Kaufman, in which the 7 Mercury astronauts assert their priorities over those of NASA scientists by pointing out their leverage with the press.

Theodore Roosevelt was a rarity in that he cultivated a cordial relationship with the press, all the more to get them on his side when he used the Bully Pulpit to push his favored policies through Congress. His distant cousin, Franklin Roosevelt, went even further in developing good relations with the press, personally conducting twice weekly off the record briefings in the Oval Office. As briefings and presidential press conferences became more common through the twentieth century, people came to accept them as an indication of openness and a window into the executive branch, however distorted and murky the view might be. At least there was communication, and official positions could be known by the press and public.

Now this administration wants to pull down the shades on its workings. It makes no difference that Mr. Spicer is being replaced by Ms. Sanders. It hardly makes any difference that briefings are fewer and characterized by disrespect for the press, since this administration has demonstrated openly its contempt for norms of civil political discourse. When you know you will be lied to and treated shabbily, why stand there and continue to take it? Sooner or later, even the most profit hungry of the media outlets may abandon the White House press briefing as a source of anything other than insubstantial blathering worthwhile only as a target for satire. This administration may then find out, if the people in it are capable of learning anything at all, that if no one is taking seriously their side of any story or even listening, then there is no more spin control. With a little self control, the press may even stop giving undue attention to the daily distraction of outrageous tweets issuing from the Oval Office, and start paying attention to the important issues affecting this country.
― Vita