Help for the Needy

July 18, 2017 Editor
Hikers in the nation’s parks and wilderness areas can find themselves in trouble due to accident or an unforeseen change in the weather for the worse, but all too often some of them find themselves in trouble due to their own carelessness and poor judgment. When search and rescue teams are called in to help reckless hikers, who should bear the cost?

Looking at the demographics of hikers, the majority are middle class or higher, and compared to the population as a whole they are wealthier and better educated than the average. Most hiking expeditions require expenses in travel and gear over $1,000, and available leisure time that doesn’t take away from the basic costs of living. Poor and working class people don’t have the wherewithal or the time for trips like that to the great outdoors. Since many of them are involved in physically demanding jobs, they are also probably less inclined to see the appeal in hiking around the backwoods during their free time. 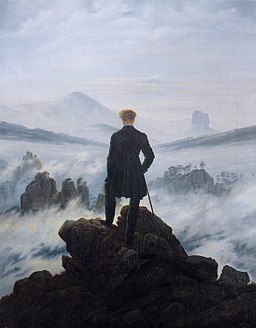 Wanderer above the Sea of Fog, an 1817 painting by Caspar David Friedrich (1774-1840).
When well-heeled people set off on an adventure they have the resources and time for, no one should interfere or try to stop them. The National Park Service (NPS), to name one organization administering hiking areas, has no desire to get caught up in the liability nightmare of being responsible for the well-being of every person visiting the areas under their jurisdiction. Visitors are on their own for the most part, and signs and literature to that effect are evident everywhere. The NPS and other organizations regularly post warnings on the premises about various hazards, including excessive heat. Still, they are loathe to close down trails on very bad days because of the inevitable outcry from visitors. Visitors are using up vacation time, and they want the park’s services and areas to be open and accessible during the time they have available.

From the 1983 movie National Lampoon’s Vacation, starring Chevy Chase and Beverly D’Angelo, a scene set in the locale made famous by the director John Ford in his westerns, Monument Valley, on the border of Utah and Arizona. Warning: foul language.


It seems, however, that some hikers take a libertarian attitude into the park when they set off from the trail head, but adopt a socialist attitude later, when they are lost, dehydrated, and woefully unprepared for the worst case scenario. Oddly enough, in Europe, where socialist policies are more prevalent than in the United States, making unprepared or reckless hikers pay for their own search and rescue operation is the norm. In this country, New Hampshire has struck a balance between taxpayer-funded search and rescue and reimbursement from rescued hikers. Other states and federal organizations could follow the New Hampshire model. It is entirely better than the Wall Street model much in use now, in which people of decent means or better embark on an endeavor of their own choosing, outside of the course of merely obtaining a living in order to accrue benefits beyond that, and when things go well for them they say it was all their own doing and they are entitled to all the benefits, but when things sour they seek to shed the blame and share the losses.
― Ed.