July 2, 2017 Vita Historia
Tuesday the nation celebrates independence from the British Crown and eventual establishment of a democratic republic. That’s the story, at least. Of the independence part there is no doubt, because that is pretty straightforward. It’s the democratic republic part that doesn’t quite coincide with historical reality, and certainly not with what the United States of America has become today. Today it is an oligarchy, and looking back over the history of the country it becomes clear the inclination was always present.
The Founding Fathers were never for a broadly based democracy, instead leaning toward governance by a limited set of people – white males with property. Some Founding Fathers, Jefferson, Madison, Adams, and Washington among them, believed the democratic republic would be stronger if more people owned property, or capital, and therefore had a say and a stake in governance. Though they were rather wealthy men themselves, they would probably be horrified at the current state of income inequality in this country and how that has wrought havoc on the democratic republic they established. 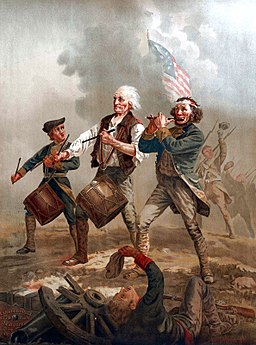 Originally entitled Yankee Doodle, this is one of several versions of a scene painted by Archibald Willard (1836-1918) in the late nineteenth century that came to be known as The Spirit of ’76.
Suffrage has broadened greatly since the eighteenth century, but a vote for candidate A over candidate B makes little difference when both candidates are backed by the same small clique of financiers and corporate boards. Once the candidate is in office, he or she tunes in the oligarchy and tunes out the voters, at least until the next election. Of what use then is a vote when the person voted for doesn’t represent your interests when in office, will often in fact work against your interests? Strangely, people will vote for that person again two, four, or six years later.

Franklin Delano Roosevelt understood there is no real political power without economic power. Enactment of his proposed Second Bill of Rights is long overdue.

To regain political power, the people need to take back wealth; to regain wealth, the people need to take back political power. Hand in hand. Remember the capitalist credo: Money talks. We have the honesty of the Supreme Court to thank for enshrining in the 2010 Citizens United decision what everyone has always known, going back to the days of the Founding Fathers, it’s just that Washington, Adams, Madison, and Jefferson had the wisdom to understand the money should be spread around a lot more in order for the government to listen to we the people.
― Vita