The Enemy of the Free Press

And if all others accepted the lie which the Party imposed – if all records told the same tale – then the lie passed into history and became truth. ‘Who controls the past,’ ran the Party slogan, ‘controls the future: who controls the present controls the past.’ And yet the past, though of its nature alterable, never had been altered. Whatever was true now was true from everlasting to everlasting. It was quite simple. All that was needed was an unending series of victories over your own memory. ‘Reality control,’ they called it: in Newspeak, ‘doublethink.’

The idea, so long promulgated that people have come to uncritically accept it as truth, of a “liberal media”, meaning by that the mainstream, corporate media, has never been more laughable than today. If people think corporate media outlets such as Cable News Network (CNN), Microsoft National Broadcasting Company (MSNBC), the New York Times, and the Washington Post, are “liberal” then perhaps their definition needs adjustment, because all of these media outlets are owned by giant corporations, and giant corporations are not known for liberal views. 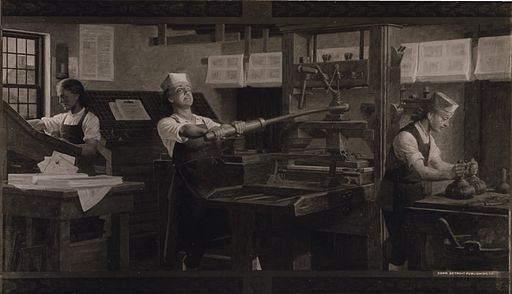 Reproduction of a Charles Mills painting by the Detroit Publishing Company, depicting a young Benjamin Franklin (center) at work on a printing press.
What is more important with news is what is left out than what is left in and reported on. Those are the editorial decisions that filter down from corporate headquarters. Individual reporters may be to the left of Karl Marx, but it hardly matters if editors change their stories at the bidding of headquarters. What matters are the terms of debate, or what is open to question and what is not. Much of this is internalized by reporters eventually, or they don’t get to become editors. They have certainly learned and adopted as Gospel the rules of the game by the time they are ready to move up to senior staff.
But readers or viewers of the news never learn what has been left out by politic editors on behalf of their conservative corporate masters. Not every corporate master is conservative? Doubtful. Liberalism doesn’t go with that territory. Some astute members of the public may pick up the general drift of coverage from a particular outlet, but when it comes down to really important matters, they are addressed in nearly the same way by all the corporate media. It comes down to the narcissism of minor differences that Sigmund Freud pointed out when he wrote “It is precisely the minor differences in people who are otherwise alike that form the basis of feelings of hostility between them.” For the diversion of the masses, educated as well as uneducated, the pundits on television and in the op-ed pages of the newspapers dispute how many angels can dance on the head of a pin, while their corporate masters fleece everyone of every last dollar. It’s a neat trick.
All of that aside, it truly is a disgrace to see the open contempt the current presidential administration and it’s Republican allies around the country display for the Fourth Estate, the Free Press. The corporate, greed-based media, have brought some of this treatment upon themselves with their craven promotion of a shallow reality television star for president – what did they expect? – but what is truly unfortunate is how the disgraceful treatment coming from the White House press room has overflowed to independent news outlets that try to honestly hew to journalistic principles. 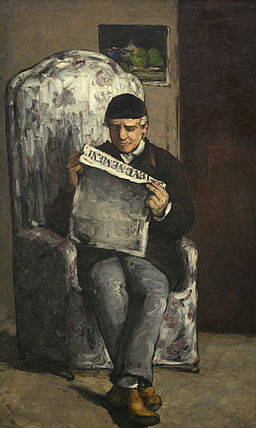 The Artist’s Father, Reading “L’Événement”, an 1866 painting by Paul Cézanne (1839-1906).
There are questions to answer, however, before getting up in arms about the bad behavior of the current presidential administration in how it treats media it doesn’t like. First of all, the question of how the current crowd got into office can be bypassed. They are there now, and that’s that. The main question for now is: Who watches these television news shows uncritically and then counts themselves as informed? and Who reads these newspapers that have long since stopped being liberal in anything but stale reputation only, and thinks that they are caught up on the latest left of center take on important issues? Who are these delusional viewers and readers whose uncritical attention and financial support allows this charade to continue and thrive? Are they the ones who support a Free Press against an antagonistic, authoritarian regime in Washington, D.C.? Don’t bet your last corporate media stock share on it.
― Ed.