June 23, 2017 Vita Historia
With the arrival of hot summer weather, people give more consideration to how much water they are drinking. It’s peculiar that such a basic survival and health issue has received as much medical and layperson attention as it has in the past forty years. It appears to coincide with the rise of the bottled water industry. Before that, people had a common sense approach to drinking water, as in drink when you’re thirsty, and drink a lot when you’re sweating. Not much too that. Certainly not enough to warrant the expenditure of millions of dollars in studies. 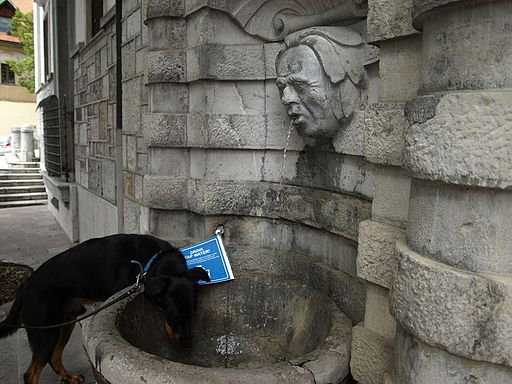 Dog drinking from a fountain in Ljubljana, Slovenia; photo by Marjolein from The Netherlands.
One practice that has thankfully been mostly discarded in the past twenty or more years is the idea that restricting water intake helps lose weight, particularly during vigorous exercise in high heat and humidity. That boneheaded practice used to be the norm in outfits like football teams and military boot camps, though now it is suspiciously difficult to find evidence of it on the internet. Memories of survivors and their anecdotal evidence will have to do. The idea behind restricting water intake of a person who needed to lose weight was that a good portion of that weight was water. Sweat away the pounds! In reality, as opposed to just dreaming stuff up, there is more water weight in muscle than in fat.
Your body does a very good job of telling you what you need. When you’re outside working or exercising in 90 degree weather, with a heat index over 100 degrees, and you are pouring sweat, and your body is telling you to drink – nay, guzzle – some water, why would you let a moronic theory tell you otherwise? Would it make more sense if the moronic theory was proposed by a coach? a drill instructor? how about someone wearing a white lab coat and carrying a clipboard? Do you think your dog or cat would hesitate a second to listen to those people before lapping up copious amounts of life-giving water? How much more or less sensible are you than your dog or cat? 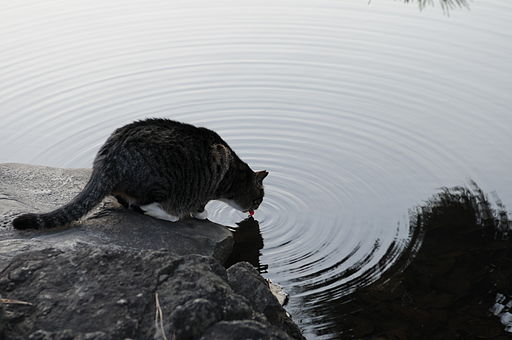 Fat tabby cat drinking water from a pond; photo by Hisashi from Japan.
Thank goodness that nonsense is all behind us, or should be. Now it seems the pendulum has swung too far in the other direction, with the silly recommendation about eight glasses of water a day. That recommendation appears to have arisen from bottled water industry executives whispering in the ears of select scientists and doctors. Ever since, there have been an awful lot of people striking poses with their high profile branded water sippy bottles. It gets to be like an article of clothing with a visible logo, announcing to all and sundry that you are a fitness-minded person with class. Sippy sippy all day long, eight glasses worth.
In this collection of Oompa Loompa songs from the 1971 film Willy Wonka & the Chocolate Factory, the Oompa Loompas didn’t address water drinking, but their common sense, didactic advice would have been welcome if they had.

What really matters, again, is what your body tells you. Your age, body type, and regular level of physical exertion are trying to tell you things, too, though sometimes a doctor’s advice may be required for you to properly hear what they are saying. Common sense, listening to what your body wants and responding to it, and a plentiful supply of cool, pure water ought to keep you safe and healthy in the summer heat. Pain doesn’t always mean gain; sometimes it means maybe you should be sensible and take a break in the shade.
― Vita