To Every Thing There Is a Season

June 18, 2017 Isidore Gnome
People enjoy their home grown tomatoes so much more than store bought that they try to extend the growing season and stretch out the harvest. The primary limiting factor is the weather, and secondarily the genetics of tomato varieties. Tomato plants prefer temperatures between 55 and 95 degrees, and in most of the continental United States that means they do their best between June and September. Summer is their season. Genetically, full-sized tomato plants, as opposed to dwarf or cherry tomato varieties, fall into two groups – determinate or indeterminate. Determinate plants grow to a certain point, set fruit, and then are done for the season. Indeterminate plants continue growing and setting fruit throughout the season.
There are conditions and variables to all these factors, and they play an important part in seeing that, hard as a gardener may try, most of their tomatoes will ripen over a shorter period than plant information tags would have them believe. Plant tags give maturation dates for the tomato varieties they describe. They are only rough guides, not to be taken at face value! Too many gardeners believe the tags and think that by planting tomato varieties with as wide a spread of maturation dates as possible they will be ensured a lengthy harvest season. Not necessarily! The weather plays the biggest part in dictating when you will get ripe tomatoes and over how long a period. The next most important factor is whether the plant is determinate or indeterminate, since determinate varieties will almost always be the first to fruit and the first to stop bearing. The maturation date on the plant tag is the least reliable factor and is nearly useless. 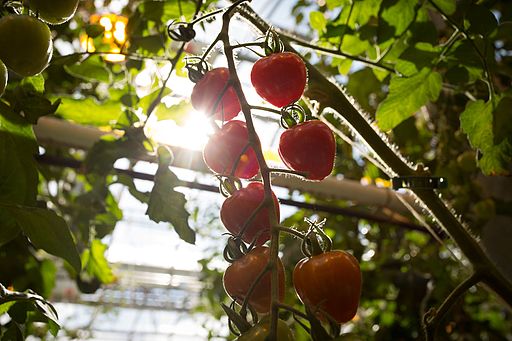 Strawberry tomatoes at Lufa Farms, the world’s first commercial rooftop greenhouses, in the Montreal, Canada, neighborhood of Ahuntsic-Cartierville; photo by Benoit Rochon.
Some gardeners think that by staggering the planting dates of their tomato plants they will stagger the harvest dates as well. Not necessarily! Again, the weather is the most important factor in how quickly or slowly your tomato plants grow. Plants started later in the spring will often catch up to ones planted earlier. Plants started too early in the spring will often sit there and do nothing until the weather warms up. You can’t fool Mother Nature!

The best way to lengthen the growing season, and therefore the harvest, is to make use of either a cold frame or a greenhouse, or both. Of the two, a greenhouse is the better option because it is ultimately more useful. A cold frame is useful mainly for starting plants, though it can also be used for low-growing vegetables and fruits like lettuce and strawberries. A greenhouse should be tall enough for fully grown tomato plants, even when they are in raised beds. A greenhouse is not a hothouse. A hothouse is, of course, heated. That would be stepping up another level in expense and trouble, which for a home gardener with a ten by twelve foot greenhouse would make every tomato unnecessarily expensive. No, a simple and inexpensive home greenhouse is primarily useful for extending the growing season from summer into spring at the front end, and autumn at the back end.

Roger Cook of This Old House helped this Mississippi homeowner build an inexpensive backyard greenhouse. At the end, Mr. Cook tells the homeowner he should be able to grow vegetables year round in the greenhouse. Since the greenhouse will be unheated, year round use would be possible in Mississippi, most of which is in winter hardiness zone 8a. Use in your location may be limited to three seasons.

There are home greenhouse kits on the market, and a gardener could spend over 1,000 dollars for a nicely appointed one. The very cheap ones are not worth even their low price, and will cause you more trouble than they’re worth. The greenhouse depicted in the This Old House video here is a solid, utilitarian model that should cost less than 500 dollars. It won’t win any awards for looks, but that would probably present an obstacle only for homeowners association members. One suggestion to improve upon the construction method in the video would involve using weather stripping or batting between the plastic and the staples to distribute the force of the plastic against the staples, reducing the chances of the plastic tearing loose in the wind. 1/2 inch staples would hold everything well, and to reduce frustration a quality staple gun is a must. As with a tarpaulin or any other lightweight material used outdoors, the plastic needs to be stretched tight to lessen its movement in the wind. After all that work and expense, you can look forward to a longer tomato harvest season, and to tomatoes that don’t cost a small fortune. You may even save a few dollars over the long haul, though it might be a stretch to say you could pay off your mortgage early, the way Radiator Charlie of West Virginia did with his ‘Mortgage Lifter’ tomatoes back in the 1940s.
― Izzy