June 11, 2017 Editor
When Mary Tyler Moore died on January 25, a few days after the Women’s March on Washington, it seemed all that Ms. Moore and the women of her generation had fought for and won needed to be fought for all over again. Ms. Moore was never the most outspoken advocate for women’s rights, but for many younger women she led by example. With her supremely well-written and acted television comedy The Mary Tyler Moore Show in the 1970s, Ms. Moore seemed to ride the crest of a wave of change for women’s prospects which was only going to get bigger and better. Since then, an overtaking wave of conservatism swelled in the 1980s and swamped political and cultural life in 2016, and it appears a belligerent subset of men (and some women) continue to resent outspoken, powerful women, and after 2016 they feel emboldened to hurl vulgar insults and even threaten violence. 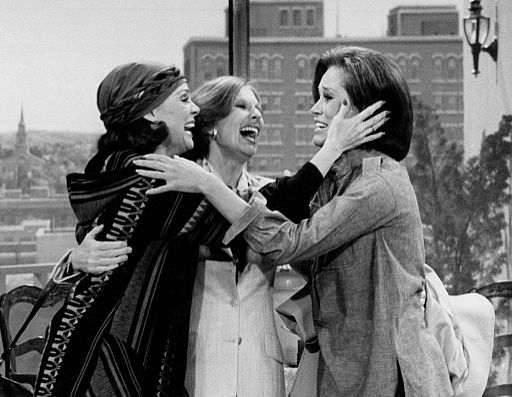 Valerie Harper (left) as Rhoda, Cloris Leachman (middle) as Phyllis, and Mary Tyler Moore (right) as Mary Richards, reunite in a scene from the last episode of The Mary Tyler Moore Show in 1977. All three were apparently good friends in their own lives as well.
In the United States there was the presidential election in 2016, and in the United Kingdom there was the Brexit referendum earlier in the year that also served to open the vents for a sullen, resentful minority. It’s surprising then to some people that conservatives do not hold a monopoly on nursing sexist sentiments. After last week’s general election in the United Kingdom, author J.K. Rowling expressed her disgust with supposedly liberal men making denigrating personal remarks about Prime Minister Theresa May. According to Rowling, their remarks had nothing to with the Prime Minister’s policies in and of themselves, and everything to do with those policies being pressed forward by a powerful, outspoken woman. The conservative movement has spilled over, and now everyone with a social media account feels encouraged to be on their worst behavior.

Great harmony by Paul Simon and Art Garfunkel in a melancholy song.

For an all too brief period in the 1960s and 70s it wasn’t that way, and it seemed things would only get better. But “better” is a personal perspective, and apparently there has always been bubbling beneath the surface of humanity a foul stew of visceral hatreds and resentments. It was a delusion to think it had gone away. There were people for whom “better” was a bitter pill to choke down, upsetting to their righteous way of life, and they bided their time until they could turn back the clock. The general population always knew these people existed, and assumed they were a conservative minority whose grasp on power was slipping away and would eventually disappear. It turns out, however, that gender and racial resentments cross political party lines and their grasp on some people has strengthened, not weakened. Not everyone is as he or she seems, and while in public they may appear to tolerate new social norms, when they get home and start tweeting and facebooking, they release their bottled up anger and things get ugly.

Newscaster Ted Baxter, played by Ted Knight, was not mean-spirited like the internet trolls of today, merely clueless.

Live and let live. What is so very hard about hewing to that old maxim? If you have respect for yourself, respect for others will follow. One of the best features of Mary Tyler Moore’s two hit television shows, and by all accounts of her own personality, was respect for the characters and for the audience, which was reflected in intelligent, good-natured writing and presentation. The Dick Van Dyke Show in the 1960s was almost entirely put together by men, while The Mary Tyler Moore Show in the 1970s had more women writers than any other show before it. Both shows were excellent reflections of their times, though more optimistic and usually showing the better side of our natures. They were comedies, after all. They are still models of a better life for men and women.