Since Hillary Clinton’s election loss in 2016, establishment Democrats, including Clinton, have scrambled to put forward excuses for her loss, excluding the shortcomings of the candidate herself, and again Clinton has been at the forefront in that endeavor, casting blame on everyone but herself except in a half-hearted manner which she immediately qualifies and takes back. Now Hillary Clinton says she is “part of the resistance”. By that of course she means the popular resistance to the administration of the person who would not be there had she not been the only candidate the Democratic establishment wanted to run against him.

Hearing Hillary Clinton say she is “part of the resistance” is like hearing the coach whose wooden ineptitude sunk your team into a deep hole in the first half, all while throwing everyone but herself under the bus for the colossal failures of the team, come out with a strident speech at halftime saying she has returned to form now and is ready to resume leadership of the players who had taken it upon themselves to set things right in the second half. No, thanks. Please go away.

The Fall and Rise of Reginald Perrin is a classic BBC comedy series from the late 1970s, starring Leonard Rossiter as the title character, and John Barron as his boss, C.J., at Sunshine Desserts. With a certain kind of boss, a sense of infallibility and the false support of sycophants becomes the major dynamic.

Hillary Clinton has her adherents even today. They are the same people who insisted during the primaries in early 2016 that they didn’t want  Bernie Sanders because they wanted someone “who could get things done” and they didn’t want someone like Elizabeth Warren, who wasn’t running but might have been induced to run, because they wanted someone “with Washington experience”. These people, many of them professional, academic, and media elites who presumed to know best, turned a blind eye to the Democratic National Committee’s undermining of Sanders during the primaries. They got the candidate they wanted, and would not listen to the people telling them she was the wrong candidate at the wrong time. Some people saw the defeat coming, even against the weak candidate the Republicans put up, but not these Democratic establishment know-it-alls. A week before the election, they were talking “landslide” for Clinton. Fools.

Then when the election results rolled in these know-it-alls were quick to side with the Clinton camp and blame the rednecks, and not long afterward the Russians, without solid evidence based in demographics of the election results or, in the case of the Russians, anything more than rumors at the time. At any rate, they couldn’t blame themselves! They quickly not only jumped on the resistance bandwagon, but shouted the loudest in order to lead it, unmindful of the hypocrisy of their position, because it was they with their pigheaded insistence on touting the flawed candidate, Hillary Clinton, who did the most to put everyone in the dreadful position the country has found itself in since January 20, 2017. Not the “deplorables”, but them, with their arrogant, dismissive attitude toward the working and middle classes. Now they chant about leading a resistance against a situation they helped create.

Meaningful resistance to the policies of the current presidential administration will come about from a recognition of the failures that brought this situation to bear, and then applying remedies. The Democratic Party has lost its way and no longer represents the interests of the working and middle classes. It now represents the interests of Wall Street bankers and large corporations. The people finally glommed onto that fact in 2016 after eight years of disappointment with Obama, and then being presented by professional, academic, and media elites with a uniquely uncharismatic candidate whose sole reason for wanting to be president appeared to be that it was “her turn”. 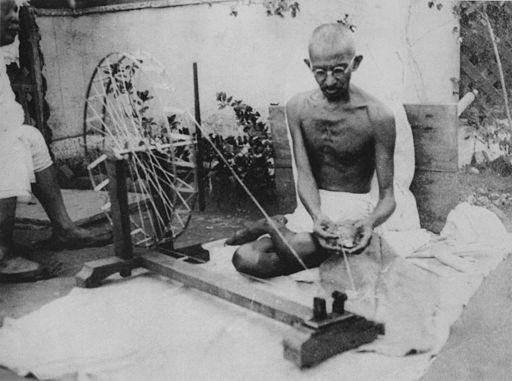 Mohandas K. Gandhi (1869 – 1948) at the spinning wheel, late 1940s. Gandhi famously said “You must be the change you wish to see in the world”.
Since the election loss, the Democratic establishment has shown no signs of learning from their mistakes, nor even recognizing them, much less doing anything about them. They continue shifting blame and making excuses. They continue pushing establishment insiders into Party leadership positions and showing lackluster support for the candidacies of Sanders progressives around the country. There is talk of impeaching the President, the Trainwreck-in-Chief, and of the Democrats picking up many seats in Congress and around the country in the 2018 mid-term elections. The impeachment will not happen without more Democrats in Congressional seats, and that will not happen, at least not to the extent that some imagine, without a change of heart, and therefore a real change of policy, within the Democratic party between now and 2018. The Democrats need to appeal to people as something other than Republicans-lite, the position they adopted in the 1990s under the leadership of Hillary Clinton’s husband, Bill. Meanwhile, there will be plenty of opportunists as well as thoughtlessly smug hypocrites and true, useful, believers who will continue to clamor for resistance, without understanding that resistance is futile until they change their own hearts.
― Ed.