Not in My Back Yard

May 23, 2017 Editor
In some areas of the United States, particularly the countryside, gun owners can step out the back door of their house and practice shooting targets, and some do so without satisfying even the minimum safety requirements of local ordinances. This behavior falls under the heading of “Just because you can do something, doesn’t mean you should”. City dwellers may imagine that all rural homesteads are capacious enough to accommodate the whims of target shooters without endangering their neighbors’ lives or property, say 10 acres at least. That is not so. Many rural residential lots are 2 acres or less. Yet the law generally does not factor in lot size as long as the area is zoned agricultural or mixed use. Common sense and common courtesy should be a factor where the law leaves a gap, but unfortunately too many citizens possess neither quality. Combine that with gun possession and there will be the devil to pay somewhere along the line. 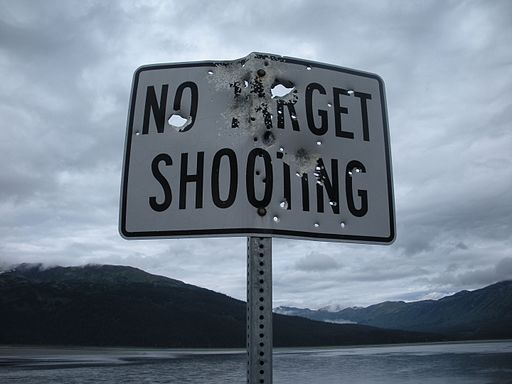 “No Target Shooting” sign located at mile 80.5 of the Seward Highway in Alaska, along 20 Mile Creek; photo by Lar. In some circles, this kind of thing passes for wit.
Discharging firearms on private property is a sensitive subject that gets tangled up in the Second Amendment to the Constitution when it really shouldn’t because of how the activity affects the safety, property rights, and quality of life of neighbors. The issue at hand is not a gun owner’s right to own guns and shoot them, but the right of the gun owner’s neighbors not to have to barricade themselves in sound-proof, bullet-proof houses, or to enjoy their property and the flora and fauna on it without having it all riddled by bullet holes. The Second Amendment guarantees the right “to keep and bear Arms”; it says nothing about discharging them responsibly. That is where state law and local ordinances step in, although in some places, again particularly in the countryside, they are far too lax. In many instances the decision by a government authority on whether a gun owner’s home firing range is safe and legal is left up to a judgment call made by a sheriff’s deputy who visits the property after being called by a distressed neighbor.
Some scenes from The Andy Griffith Show demonstrating why Sheriff Andy Taylor eventually issued Deputy Barney Fife only one bullet and insisted he keep it in his shirt pocket.

Enactment of a noise ordinance can help restore sanity to a neighborhood. It’s interesting to note that gun owners who are conscientious about safety advocate hearing protection for the person discharging a firearm, but rarely take into account how the noise affects those within earshot. Unlike the noise made by a lawn mower or even a loud stereo system, gunshots are an intimidating sound. Perhaps for some gun owners that is part of the appeal. A noise ordinance can also help restrict target practice to daylight hours, because as hard as it is to believe, existing private property firearm discharge ordinances often do not explicitly state that target practice after dark is not allowed. Apparently that is where common sense and common courtesy are supposed to fill in the gap. 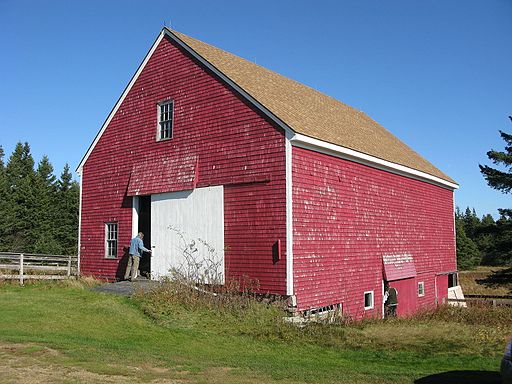 A New England style barn on North Haven, Maine; photo by Jim Derby. Never mind trying to hit the broad side of a barn, watch out for the people!
But you can’t talk sense to some people, the hard cases. For them, it appears, the only solution to keep peace and quiet in the neighborhood will be to have state and local laws that prohibit target shooting at any place but a legally instituted firing range. Can’t afford firing range fees? You can afford bullets, though, and they aren’t cheap. Still want the convenience, if not the cheapness, of stepping out your own back door to blast away? Fine, then go to the trouble and expense of acquiring the minimum amount of land that will allow you to qualify it as a legally instituted firing range. But these new laws will restrict the ability to target practice to only those of substantial means! Tough. There are lots of things in life that poor people don’t get a fair shake on, and if one of them is the ability to make their neighbors’ lives miserable, then so be it. Anyone of limited means who has moved out to the countryside with the dream of enjoying nature in peace and quiet only to have that dream shattered by the booming report of a nearby thoughtless neighbor’s gun firing, often repeatedly and at nearly all hours, and to satisfy no other purpose than that neighbor’s sense of fun or imagined readiness for the Apocalypse, will shed nary a tear when that neighbor has to jump through a few more legal hoops to ensure he or she behaves with common sense and common courtesy.
― Ed.