February 10, 2017 Isidore Gnome
The middle of winter is time for garden maintenance projects the growing season doesn’t allow time for, such as keeping English Ivy (Hedera helix) at bay by pulling it off trees and structures, or yanking it out of the ground. The idea of eradicating it altogether is best left to fantasy. Besides, some gardeners, like the ones who brought the plant from the Old World to the New in the Eighteenth Century, harbor no ill will toward English Ivy and instead choose to encourage it’s growth. Those who look on it as a pest and choose to discourage it can be left wondering why anyone in their right mind would plant it next to a building and allow it to destructively sink its roots into crevices in mortar or siding. 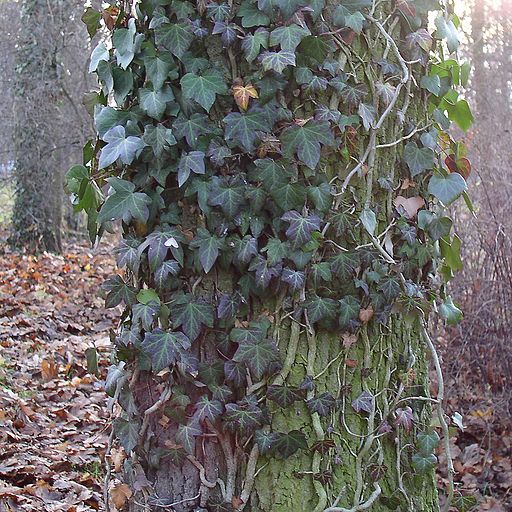 English Ivy in winter climbing a tree in Poland; photo by Agnieszka Kwiecień.
The misconception about ivy’s destructiveness is due to confusion about names, and presents a good argument for learning the scientific names of plants rather than relying on common names. English Ivy, the invasive pest which produces aerial rootlets that find their way into a building’s cracks as it climbs upward, is not to be confused with Boston Ivy (Parthenocissus tricuspidata), which uses suckers to adhere to a building and is therefore less harmful. Boston Ivy is also an introduction from the Old World to the New, though it has a native relative in the Virginia Creeper (Parthenocissus quinquefolia). Boston Ivy, not English Ivy, is the vine that decorates old brick buildings around New England, and particularly on college campuses, where it lends its name to the Ivy League. 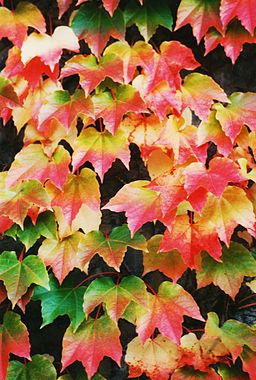 Boston Ivy in autumn, South campus, State University of NY at Buffalo; photo by Y.G. Lulat.
It is no easy or safe task pulling English Ivy off a building where some ill-advised previous gardener had planted it or allowed it to grow under the impression that he or she was evoking some of the atmosphere of tweedy academia. Depending on the building construction and its soundness, chunks of mortar or shards of wood siding are apt to come loose with the ivy where its rootlets have dug in. It’s best to cut the vines at ground level and let them die back in place, drying and shrinking in the process, and then after several months have passed, pulling away the remaining dried bits once they have lost their hold on the structure. 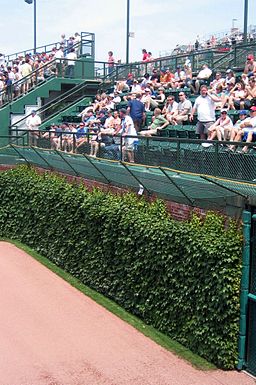 Wrigley Field, Chicago – Right Field Wall with Boston Ivy; photo by Flickr user wallyg.
Some gardeners think they can manage English Ivy clambering on a well maintained building. They may believe its evergreen and tough-as-nails attributes are worth the trade-off of constant vigilance over the safer alternative of planting the deciduous and better behaved Boston Ivy. More power to them if they think they can keep an eye on it! It is far more likely, however, that where you see English Ivy on a building it is there because someone didn’t know any better and, relying on common names, thought one ivy wasn’t much different than another and so let it go thinking it lent the place a touch of classy greenery. An excellent case can be made here for paying attention to scientific names for plants rather than dismissing them as the affectations of pedantic know-it-alls, and it’s a lesson those gardeners have learned all too well who have spent countless winter hours tugging out skeins of Hedera helix where it has tangled itself into absolutely everything.
― Izzy