January 13, 2017 Isidore Gnome
“Carthago delenda est!” [Carthage must be destroyed!] ― Cato the Elder
The National Weather Service has forecast an ice storm for the central United States this weekend. Road crews will most likely treat the roads with a brine solution before the storm arrives, and in case ice accumulates nevertheless, they will return to treat the roads with rock salt, sand, and possibly other materials to increase traction for motor vehicles and rid the roads of ice. What happens to all that salt after the storm, and how does it affect roadside plants, soil, and the water table? 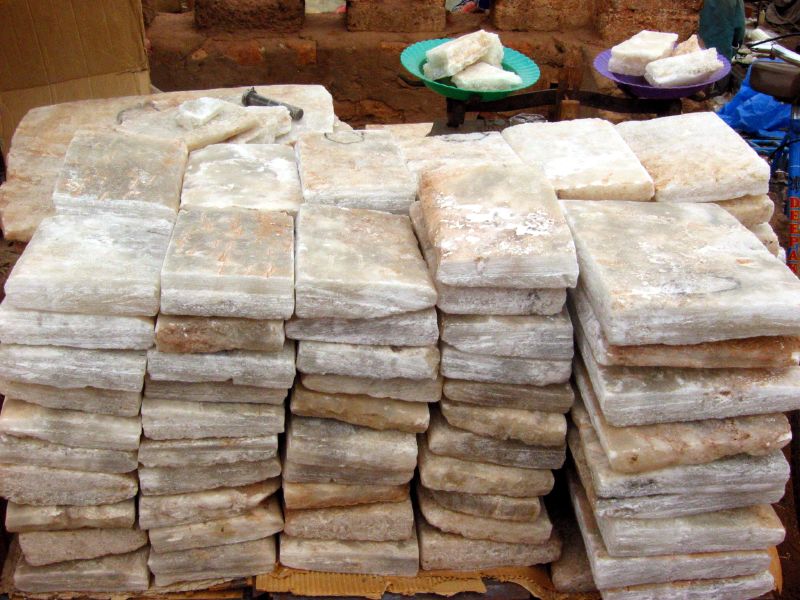 Blocks of salt from Timbuktu; photo by Robin Elaine. 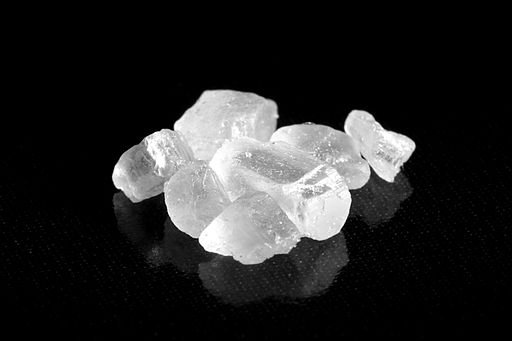 Salt crystals; photo by Mark Schellhase.
Some of the salt dilutes with water from the ice and atomizes into droplets that passing vehicles spray onto roadside plants. The damage can most easily be seen in early spring as plants and trees sprout new foliage which may suffer from scorching on the side that received the salt spray. Most of the salt runs off into the soil and the water table near the road, where it can cause a number of problems, including interfering with water uptake by plants and contaminating residential and agricultural wells. Some salt migrates into city water supplies.
Excessive salt has long been known as a detriment to agriculture. Plants show little need for salt, while animals can’t live without it. Our word “salary” is rooted in the Latin term for salt, which indicates its crucial importance to everyday life for people. It’s ironic then that poor fertilization and irrigation practices can lead to the salinization and ultimate abandonment of agricultural land. With population growth come more roads and development into the countryside, taking over or abutting traditionally agricultural land, and consequently adding more salt to the environment. 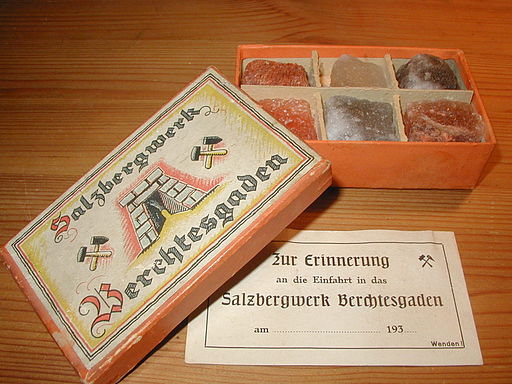 Salt from a mine near Berchtesgaden, Germany; 1951 photo by Roger McLassus.
Some localities across the nation have been experimenting with alternatives to use of rock salt exclusively, such as mixing in cheese brine, beet juice, or sugarcane molasses. Whether or not these alternatives ultimately prove as effective as rock salt and comparable in cost, for auto drivers who need to get out and about in an ice storm personal safety understandably comes first and environmental effects second, or even third after reckoning the tax bill for materials and labor. Considering all that, we might reflect how Cato the Elder’s oft invoked exhortation to vanquish the Carthaginians at any cost led after many years to civil war and then to the dubious distinction of empire, and we might then note how a relentless quest for domination of our perceived foes, in nature or otherwise, as often as not has unintended consequences and unfortunate side effects for ourselves.
― Izzy