November 27, 2016 Editor
Fake news is in the news these days. There’s nothing new about that, really. We have always had to contend with dubious sources for our information, and ultimately we have always had to fall back on our own healthy skepticism and critical thinking to discount those sources. The difference now seems to be with how fast and how far lies can spread through social media, and how well people who believe those lies can insulate themselves from contrary information. Don’t confuse them with the facts!
A reasonable discussion of the issues confronting our society is not possible when different sides come armed with their own facts, all of which conveniently confirm their biases. Before discussion is even possible we have to agree on at least some facts that are, as it were, self-evident. If we insist on our own so-called facts to the exclusion of others, then we descend into tribalism. 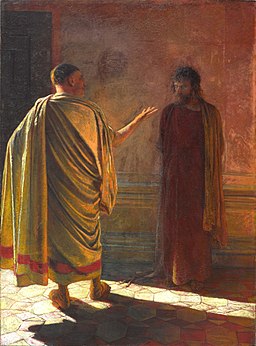 “What is truth? Christ and Pilate”
painting by Nikolai Ge
How to determine fact from fiction? Common sense observations are a good place to start. Gravity is a fact. Dispute it at your own peril. The Earth is round, as one can see when the Moon moves into the Earth’s shadow during a lunar eclipse. Despite that observable fact, because the conclusion requires a leap into abstract reasoning many people throughout history have not agreed the Earth was round. Some people still don’t agree. From celestial mechanics down to whether an ant can move a rubber tree plant all by itself, there is more or less room for dispute regarding the facts of life, depending on how well we can prove them ourselves or trust the proofs of others.
Think of all the common expressions people have used over the years relating to skepticism and the alternative, gullibility:

There are many more, of course. Another expression has to do with learning a hard lesson from gullibility:

A twist on that with a nod to a rock song by The Who was coined by George W. Bush: 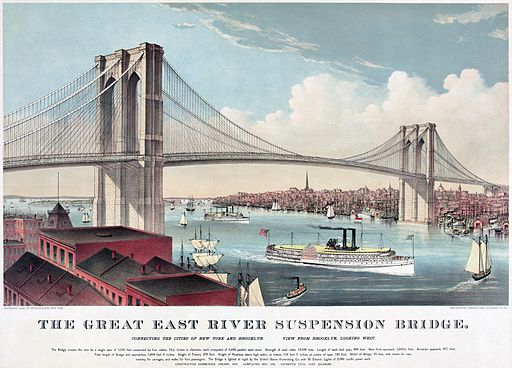 1883 illustration of the Brooklyn Bridge, looking west; by Currier and Ives
Facebook and other social media sites which share news sources with their members have promised to more vigilantly curate what they allow on their platforms, but ultimately the responsibility lies with readers to view all news skeptically, and question their own willingness to hear what they want to hear and little else.
– Ed.