December 22, 2016 Vita Historia
The Weimar Republic in Germany was all but finished at the end of 1932. In September, Chancellor Franz von Papen had dissolved the parliament, or Reichstag, after a vote of no confidence. The government was in gridlock, and power splintered among a half dozen or more political parties with little inclination to compromise with each other. Von Papen found it impossible to assemble a ruling coalition, and he eventually resigned. On January 30, 1933, by appointment from President Hindenburg, Adolf Hitler took over as Chancellor. 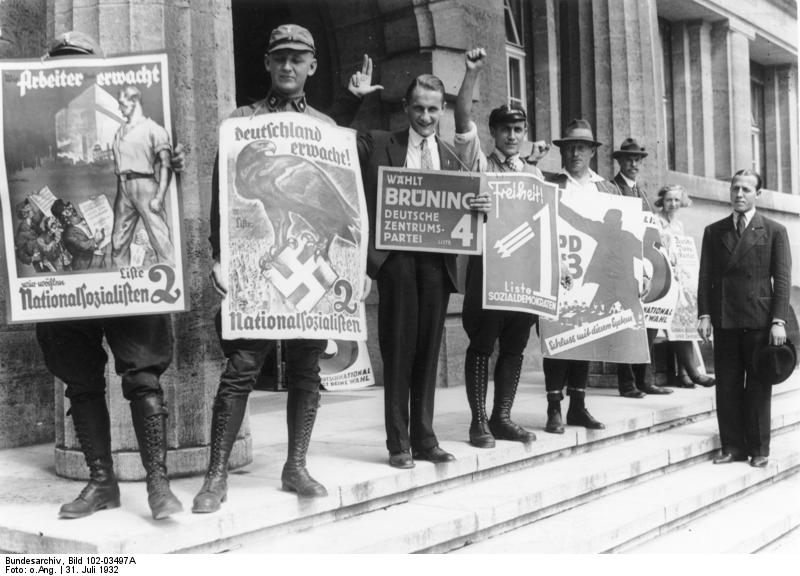 Electioneering outside the Reichstag, July 1932; photo by Georg Pahl
At the end of 1932, six million people were unemployed in Germany, in a population of 65 million. The unemployment level was similar in the United States, where 12 million people were out of work, in a population of 125 million. Nonetheless, the Great Depression hit Germany even harder than the United States because at that time the U.S. was a creditor nation and Germany a debtor nation, with an economy propped up by loans from the Americans. As the effects of the Great Depression became clear around the world, nations moved to impose tariffs to protect their domestically produced goods, and Germany could no longer get export income. Germany had also been crippled by over a decade of reparations payments to the victors of World War I, until July of 1932, when it negotiated a suspension of payments.
In the July elections for seats in the Reichstag, the Nazi Party won 230 seats out of 608 available, giving them the largest representation of any of the parties. Hitler himself never was elected to power, having lost the presidential election to the incumbent, Paul von Hindenburg, earlier in the year. As noted, it was Hindenburg who would appoint Hitler to power in 1933. 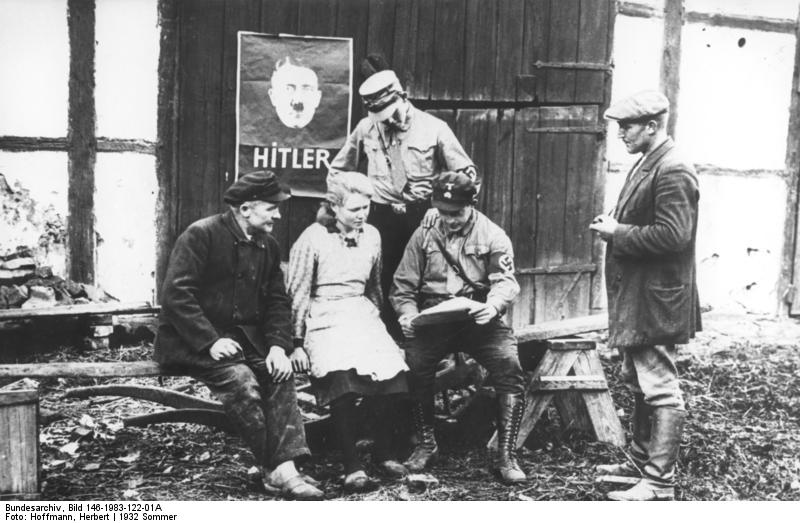 Electioneering in the countryside, July 1932; photo by Herbert Hoffmann
Amidst the political turmoil of the dissolution of the ineffectual Weimar Republic and the rise of the authoritarian Nazi Party, a singing group of six young men – three of them Jewish – came together in Germany in 1927 and rose to prominence there as well as internationally, until the death of Hindenburg in 1934 removed the last restraints on Hitler’s ambitions and dark dreams. With that the curtain came down and the singing group dissolved, the Jewish members eventually escaping Germany. They called themselves the Comedian Harmonists, and they recorded their version of “Silent Night, Holy Night” on December 9, 1932.
– Vita