I Alone Can Fix It

September 15, 2017 Vita Historia
Strange, megalomaniacal words from a potential head of state, who would become the 45th president of the United States after his 2016 campaign. Enough voters believed him, whatever “it” might have been in their own minds, to make him president in 2017. “It” was left open to interpretation in the election. Whatever “it” was, the strongman would fix “it.” That was good enough for a significant portion of the electorate to put him into office regardless of the will of the majority expressed through the popular vote. 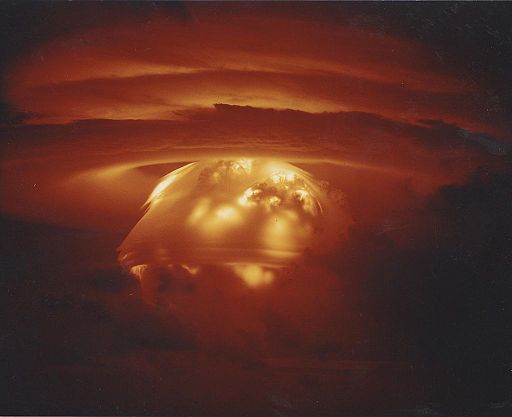 The fireball and developing mushroom cloud of the Castle Bravo thermonuclear weapon test over Bikini Atoll in the Marshall Islands of the South Pacific on March 1, 1954. Photo by the United States Department of Energy.

Since the election of the 45th president, people have speculated on what will contribute to his ultimate demise, a speculation which seems natural considering the 45th president’s proclivity for self-destructive public pronouncements via Twitter and his other activities. The president’s critics have said he will be impeached, or that the Vice President and Cabinet will invoke Section 4 of the 25th Amendment to the Constitution. These are all pipe dreams, because they imagine real political courage among high level members of the Republican Party, which is not about to manifest itself.

American psychologists will deliver pronouncements on the president’s mental state and people will call on that account for his removal, invoking Section 4 of the 25th Amendment, but his removal will never happen as long as Republican leaders lack the will to effect it. Republicans hold majorities in the federal House and the Senate, as well as in State Legislatures and Governorships. To attempt the removal from office of a Republican president without their approval and active participation is pointless. Section 4 of the 25th Amendment is dependent every bit as much on political considerations as on physical and psychological evaluations of the president. Invoking it will be difficult, to say the least.

In the 1964 film, Dr. Strangelove or: How I Learned to Stop Worrying and Love the Bomb, directed by Stanley Kubrick, the president is portrayed as a mild-mannered, reasonable character surrounded by eccentric lunatics. What if the situation were different in that the head of state was the lunatic? In this scene, Peter Sellers plays Dr. Strangelove and President Merkin Muffley, and George C. Scott plays General “Buck” Turgidson.

Will the 45th president shoot himself in the foot? Quite likely, considering his past behavior. Will that be enough to secure his removal from office? That depends on the reactions of other Republicans in legislative offices and in the presidential administration, and while they may look to psychologists’ reports for corroborative evidence, ultimately they will base their case on legal and fiscal wrongdoing and their own political calculations, looking to a history in legal precedent that is cut and dried.
― Vita