I Have Nothing to Hide

March 19, 2017 Techly DoRight
So when they continued asking him, he lifted himself up and said unto them, He that is without sin among you, let him be the first to cast a stone at her.
― John 8:7 (Jubilee Bible 2000)

In any discussion of government surveillance, such as has been revealed by the recent WikiLeaks “Vault 7” release of CIA documents, there are some folks who are apt to pipe up with “Let the government spy on me – I have nothing to hide.” By that they presumably mean for their listeners to understand they are not terrorists, criminals, or perverts, and to drive home their utter lack of impure intentions they will often add a feebly humorous aside about how government agents would fall asleep from the boredom of eavesdropping on them. How reassuring to learn that government flouting of the Fourth and Fifth Amendments to the Constitution is okay because there are some among us who are without sin! Whether these folks realize it or not, their smug pronouncement comes out of them because in their lives the presumption of innocence has always been a given, and therefore government agents would have no interest in their good citizen behavior. It doesn’t seem to occur to them there are others in our culture who, through no fault of their own, are presumed guilty, and there are still others who are just as law abiding as the “nothing to hide” crowd, but may be concerned about hackers and thieves accessing their data, or simply want to be left alone and feel that their affairs are their own and should not be the concern of the government. We can use locks on our doors not only to keep out criminals after all, but nosy neighbors and government snoops as well. 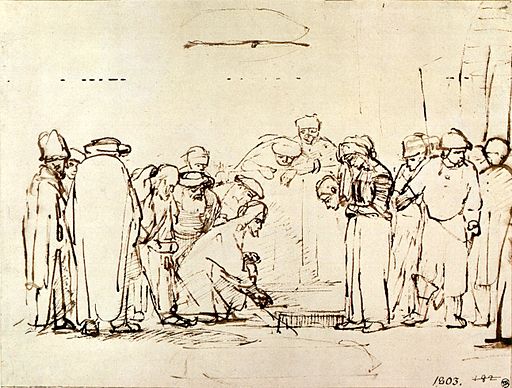 Jesus and the Adulteress; drawing by Rembrandt.

The digital age has changed the game somewhat by introducing new channels of communication and cheap storage for vast quantities of information. The Fourth and Fifth Amendments are no less valid, however, in stating that citizens should be secure in their “effects”; that government officials need warrants; that citizens cannot be compelled to testify against themselves; and that government shall follow due process of law in proceedings against any citizen. Naturally the Founding Fathers did not foresee the age of computers, smartphones, and the internet. They didn’t need to foresee those things, because in looking back on thousands of years of ancient Roman and Greek law and English common law, they were able to extract valid principles which were applicable to the general human condition whatever the particulars of any one era might be. Since their time, we have moved from postal mail and personal messenger to phone calls and telegrams, and now to blog posts and email. Government snooping amounts to the same thing whatever the means of communication, and it is protection from the ends that the Founding Fathers wrote into the Constitution.

That much should be obvious, yet the erosion of the Bill of Rights continues bit by bit, often with the excuse that technology has wrought different contingencies in our modern era. There are no different contingencies – what has changed is that the state of emergency appears now to be permanent because it suits the agenda of powerful interests in the military-industrial complex. In the past, the United States government trampled rights for various reasons which seemed sensible to many at the time, from the Alien and Sedition Acts of 1798, to the Palmer Raids of 1919 and 1920, to the internment of Japanese-Americans in World War II. Always the advocates of such policies invoked a state of emergency to justify the abuse of state power, but eventually calmer heads and changing circumstances would prevail and the balance would be corrected.

A segment of Eisenhower’s January 17, 1961 farewell address, with commentary.

As long as there are enablers of government snooping who complacently and self-righteously announce to everyone within earshot that they “have nothing to hide,” dislodging the powerful interests invested in the current status quo and restoring a constitutionally correct balance between citizens and government will be a protracted struggle. Those who value the privacy of their communications enough to take measures to protect it, such as by using the Tor internet browser or encrypting their emails, are thereby presumed guilty of possible anti-state, criminal, or sexually deviant enterprises by government snoops and their sanctimonious “nothing to hide” enablers because the very action of taking privacy measures draws scrutiny from those groups and is something they deem an admission of being up to no good. It is as if the Fourth and Fifth Amendments have been turned upside down, and objecting to having snoops looking in the windows of your house and walking in through the front door any time they please is fussy obstructionism, definitely unpatriotic, and possibly prosecutable. The “nothing to hide” folks are unconcerned over these developments, secure as they are in the comforting knowledge of their own innocence, though they may want to keep in a corner of their uncluttered minds the notion that the perception of innocence by those in power can shift capriciously, and so they are well advised to note this paraphrased bit from a poem by the German Lutheran pastor Martin Niemöller: They came for the Privacy Advocates, and I did not speak out – Because I had nothing to hide.
― Techly